Paravulii, by Nicolae Batzaria. Editura Cartea Aromana, 1989. $18., paperback. We Aromanians have a very small body of literature, most of which appeared under the auspices of the short-lived Rumanian nationalist movement (1860-1945). If I had to pick one out of this handful of writers to reprint in 1989, it would be Nicu Batzaria, for …

Cultural Forum: The Women of Nizhopoli

Our community represents a golden opportunity for oral history. Not only do we preserve some of the language and customs that have been lost in the old country over the last 75-100 years, but we also have recorded the history of the immigrant experience in America. Here is just one example, a song that used …

Did You Know What What Other People Have to Say about Us?

“We lodged at an inn kept by a Vlah, who, as I was such a rare bird, most kindly invited me to visit his private house. And all his family in their best — the ladies dressed alla Turka — received me with great hospitality, and the very strongest rakia it has ever been my fate to sample. Marko …

This is the giant water-wheel which transformed the rushing cold water of the mountain stream into mechanical energy which in turn powered the sawmills and flour mills of Baieasa. Please note (p.14) the geometrical perfection of the wheel, which involved many complex principles of applied geometry. At a glance it seems to resemble a huge …

Letter to the Editor

Dear Editor: Plaudits to you and those responsible for the revitalization of the Society Farsarotul! I have enjoyed receiving the newsletter and have taken the liberty of photocopying the February ’89 issue for distri-bution to several Land of Lincoln “Vlachs” whom I have met through my work in the Illinois State Library. Enclosed is an …

We hope this issue of our Newsletter finds you in good health and good spirits. We have an exciting issue this month. About a year ago I received a call from a fellow in Stow, Ohio who was kind of amazed that there was actually a society specifically for the Arumani, as he put it. This …

Without Anger or Bias

“Sine ira ac studio.” Without anger or bias. These are the words of the great Roman historian Tacitus, although his claim to have written impartially and without bitterness has been doubted by many who have read his dry but savage accounts of early imperial Rome. In writing the history of the Vlachs I did try to … 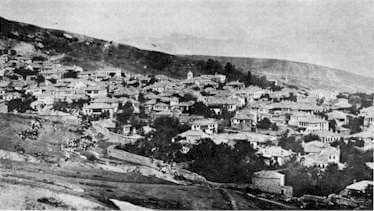 First, some family back-ground: My mother’s maiden name was Mariana McCombs. The fourth of six children, she was of mixed British and Germanic background. My father’s name is Anastas Thomas Rushaki. He was the first of six brothers; his father came from Magarova, his mother from Krushevo (both now in Yugoslavia). Being the first grandchild …