We welcome with great pleasure the following new members:

Our correspondent in the Midwest, Tom Rossiaky, expects to attend our Annual Dinner Dance on November 11, 1989. In the meantime he sends us the following exclusive report: “Early this century, a handful of Aromanian families settled in Newark, Ohio. One of them, Pericle “Pete” Mike, married a woman from his own native town in Macedonia, Moloviste. Pete purchased 35 acres of farmland on the outskirts of Newark and then sold his farm in the 1950s to a housing developer. When the sale was being arranged, Pete made a special request that one of the streets be named after his native village of Moloviste. The request was honored.” See the photographs below of the street in Newark and of the original village (now in Yugoslavia). 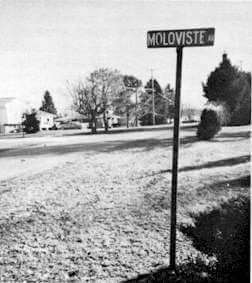 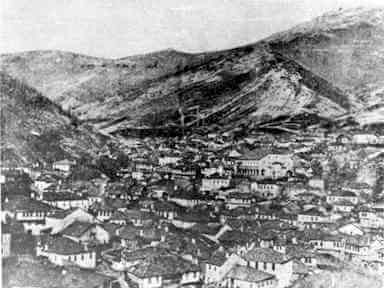 One of our writers, George Moran, recently published an article in The GreekAmerican that was well-received in the Greek community. Entitled “A Vanishing Heritage: The Vlachs and their Villages,” it appeared in the June 3, 1989 issue. News flash: Just as we were about to go to press, we discovered that George and Lori Moran are the proud parents of a 6 lb. 11 oz. boy, Alexander James Moran. Congratulations!

Please note that our Annual Meeting, open to all members, will take place on November 12, 1989 (the day after our annual dance). This is your chance to become directly involved in the programs and leadership of the Society. It is a sign of the revival of our community that attendance at these meetings has been increasing every year. Further details will arrive in your mailbox soon. We look forward to a jam-packed hall; see you there!

We are not the only people interested in our history; the following note comes from a person of Slovak descent:

“Andrew Fabula, of 5497 Coral Reef Avenue, La Jolla, CA 92037, in the course of family history research, has noted evidence of ancient Vlach pastoral nomads who migrated along the Carpathians to Upper Hungary and adjacent parts of Moravia, Poland, and the Ukraine. He is particularly interested in personal names of possible Vlach origin, such as names ending in -ula, -ulya, etc., and would like anyone also interested to contact him.”

The second cooking class sponsored by the Society Farsarotul was held on June 7. All were treated to a delightful evening which began with a wine and cheese social and the showing of the video of the 85th Anniversary Dinner Dance. Instructors Sylvia Fatse and Vichia Fatsy did another superb job in demonstrating the preparation of pani shutsata cu cashu (cheese twisted bread), cara cu vinu (beef in wine sauce), and kadaifi (sweet shredded wheat and nut pastry). Recipes for each item were distributed to take home (they will be included in a future issue of this Newsletter) and the class enjoyed servings that had been prepared in advance. We thank Sylvia and Vichia for volunteering their talents for this popular cooking class. A mailing announcing the next class will be made in October. Look out Julia Child!