Cultural Forum: A New Tone for Our Cultural Discussions

As we know from modern anthropological research, and as Beverlee Fatse Dacey illustrates in this issue, language is by no means the only component of a culture, nor even a necessary part of it. It is just one of many aspects of culture–an important one, no doubt–yet it is quite possible to have an Aromanian identity without knowing the language (beyond the several dozen key words we always seem to know, such as pita, maia, apa, tsi fatsi?, ghini, Dumnidzau, etc.). There are families all over central Europe, from Vienna to Skopje, from Tirana to Bucharest, who have not spoken Aromanian for two or three generations and yet who retain Aromanian identity and culture. At the same time, there are others who know Aromanian but who do their best to adopt another culture wholesale, in the mistaken belief that more developed cultures are somehow “superior”– they are not, and it is perhaps this realization more than any other which is leading people back to older cultures in search of values which might be longer-lasting than those offered by “modern” civilization.

This description seems to fit our American community particularly well: We are certainly losing the language, but we retain enough of our culture and ethnic identity to be able to return to them when we sense it is needed.

This is a different approach from that of the generation of Aromanians who were born in Macedonia, many of whose lives were permanently and painfully marked by a political struggle between Greece and Romania for our allegiance. In those old days, it was felt that the language was absolutely crucial, even sacred.

Even though we know now that language is not the only issue, nevertheless some old ideas have persisted even to this day; a good example is the so-called “Aromanian Anthem,” a poem by Constantine Belimace entitled Parinteasca Dimandare (“Will of the Forefathers”), which, however appropriate it may have seemed 100 years ago, has an extremely discomforting ring to it in this day and age. A rough translation follows:

At a recent “Congress” dealing with our people, objections were at last registered by some who were repelled by the deep curse this poem invokes upon all of us here in America and aroundthe world who do not speak Aromanian–as if that were all that counted.

There are alternatives to this bitter poem as a focal point for our culture, such as the sensitive, graceful poem by George Murnu entitled Grailu Armanescu (“The Aromanian Word”); it is not so much concerned with rote language as it is with the entire cultural milieu–the mountains, the home hearth, a natural environment, freedom, occasional strife, and family. I hope the hasty translation below conveys some of the images the poem has in the original version:

The difference in tone is marked; which do you prefer?

We cannot afford to devote ourselves here in America to an idea which simply excludes perhaps 90 per cent of us. It is plain to see that, like all other immigrant groups in this country, ourlanguage is mostly lost by the third generation, which is the generation whose responsibility it is to carry on the Society Farsarotul now. The fact that most of us cannot speak Aromanian does not mean that we haven’t got a feeling for our community and for our cultural background–quite the contrary, as shown by our membership in the Society and our interest in its affairs.

We must face these facts maturely and change the tone of our cultural discussions to one which is more inclusive of all who feel an Aromanian identity, no matter what language they speak or what church they attend. To reject the actual, living community — our sons and daughters, sisters and brothers, our cousins and godparents, friends and compatriots — over the language questionis like throwing out the baby with the bath water: a hugely misplaced importance. 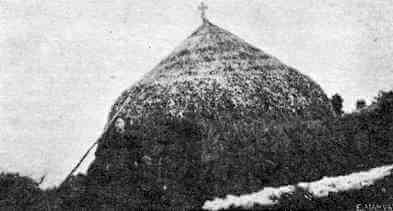 1927, 20 Jul.
A typical straw hut (caliva) built by nomadic Farsarotsi in their travel
through the Pindus Mountains. Such houses are rarely found anymore.

PrevPreviousCommunity News
NextOur Diaspora in Transition: Some Views on Culture, Language, and ChangeNext