Our Diaspora in Transition: Some Views on Culture, Language, and Change 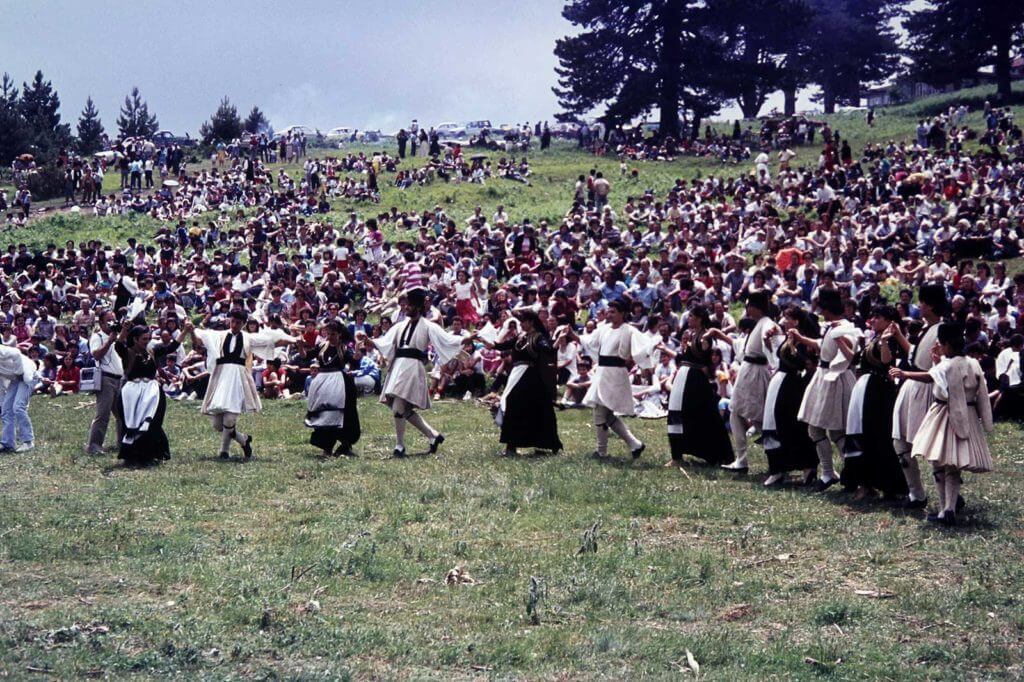 I have lived in the Vlach villages of Greece for each of the past 12 summers, a testimony to my love for our culture and language. Following as closely as possible the travels of Alan Wace and Maurice Thompson in The Nomads of the Balkans, I have visited and come to know over 80 Vlach villages in Greece, many of them over remote and harsh roads. These travels were and continue to be a joy for me, almost as if embarking on a sacred calling; they become spiritual journeys of enlightenment, providing insight into our people, our villages, and the nuances and dialectal variations of our language. As an unexpected bonus, they have also provided a wider horizon of ideas and a better view of our own communities here, a view that would not be possible without leaving Bridgeport and the Northeast U.S.

By its very nature and definition, modernity is a threat to tradition, and our own ethnic heritage–often taken for granted–now clings perilously to its last vestiges. Barring drastic modifications, we Aromanians may one day disappear as a distinct ethnic and linguistic group. The modern world has caught up with us and our 12th hour is at hand. It is our moment for reflection.

I begin with this fact simply because it is the single most obvious reality of our existence. Today’s world is making unprecedented demands on all ethnic groups everywhere, and our own survival may well depend not on how well we recall our departed old-timers, nor on how well we can romanticize our cultural ethos from the viewpoint of nostalgia and sentimentality, but on our readiness to adjust our venerated Aromanian cultural-linguistic heritage to a challenging modern society. More often than not, nostalgia becomes a hindrance, a mere device to avoid confronting the harsh realities of our time; instead, we must look with bold conviction and with resolution to the present and the future.

As the world marches in its uncertain and uncharted direction, so too do cultural phenomena. What defines us in one milieu may not necessarily define us in another. From our nomadic-pastoral genesis to the industrial age and now to the era of high technology, we Vlachs have made adaptive changes in our culture; bits of our past are either discarded or modified to suit the present. These cultural adaptations have been occurring throughout our history.

Our own diaspora community, here in the U.S., must accept the challenge to change and adjust, or perish. The Vlachs of Greece are also confronting a changing society that is making unprecedented demands. One sees this everywhere in Thessaly, Epirus, and Macedonia. Their choices are similar to ours: Assimilate or accommodate changes. And Greece is also the only country where the Vlachs seem to be uniting through festivals and dances, ever conscious of their past.

Based on my own extensive travel through the Vlach villages of Greece, the following issues have assumed great importance for me in viewing our heritage and its continuity: 1) accommodating change; 2) our approach to our language; 3) as a diaspora community, turning to our homeland (patridha) for cultural nourishment.

The Accommodation of Change

Change is inevitable everywhere, whether we wish it or not. A stagnant culture must revive itself. Here in our community in America, we must recognize as our compatriots in Greece have done that we are confronted by powers greater than us, and we must make certain accommodations. Our willingness to make these adaptations to a modern society now assumes an importance it never quite had before.

Change requires great amounts of energy and vitality, along with sustained interest. Our transformation may even be thought of by many as a revolution of sorts, and perhaps it is, for survival purposes, because the old guard in any culture must inevitably give way to the new as the keepers of tradition. By participating in our graceful traditions and by becoming aware of the facts of our history, we have prepared ourselves for the challenges ahead.

One historical event emerges depicting change and adaptation: the destruction of the famous Vlach town of Moscopolis in the 18th century by Albanian raiders. The Aromanians of this prosperous, cultured town–some 40,000 strong–saw their cultural-economic foundations shattered before their eyes. They moved on, however, in all directions, bringing their traditions, culture, and acumen with them, all the while adjusting these to new environments and ways of thinking. Destruction necessitated mobility and revival under different circumstances.

Like all diaspora languages, Aromaneashti is now “frozen,” locked anachronistically within the remaining framework of an old and changing immigrant community, unless we incorporate within it the language of the host country. A language can only explain the cultural and material phenomena around it; the simpler the culture, the simpler the language.We have words only for those things we have use for in any particular culture: The Eskimos, for example, have nowords for “hammer” and “nail,” simply because hammers and nails are not part of Eskimo material culture. And whereas in English, we have only one word for “snow,” snow is so important to the Eskimo way of life that there are 20 words for specific types of snow.

Our own language serves the culture of nomads traveling to high mountain villages. Despite an extensive vocabulary, Aromaneashti has not quite adjusted to serve contemporary usage. Yet, resourceful adjustment can be a survival tactic; languages are flexible, not static, and they adapt readily when made to.

One need not go beyond Metsovo (Amintshu in Vlach), high up on the southern flanksof the Pindus Mountains (and the home of the famous Averoff, Tossitsa, and Stavrou families), to witness a viable amalgamation of two languages. The best Aromaneashti in Greece is spokenin Metsovo, along with Ameru and Migidea; it is maintained to this day as a first language by young and old simply because its inhabitants gracefully blend it, when necessary, with Greek. TheVlach vernacular remains strong, forming the bulk of the vocabulary, and Greek fills in to accommodate the contemporary. It is a perfectly bilingual village, harmoniously utilizing two distinct languages.

In Armata, another small village higher up in the Pindus range, the young people, though not as fluent as in Metsovo, have recently begun to take their language more seriously. After a winter dispersed throughout Greece, the village congregates once again during the summer months–an ancient custom–and a language revival has caught on. I have seen similar interest in other Vlach villages in Greece, proof of the potential of our language.

Like many others, I believe that a culture cannot survive and customs are integral to any people, but the culture proceeds only superficially without its mother tongue. As language fadesso too does the culture’s “consciousness,” sooner or later. For ours to survive, we must utilize it as a living language and adapt it to our environment, following the lead of Metsovo and others.

The Diaspora and the Old Country

As a diaspora community, our cultural and linguistic stock must be replenished from the homeland. The steady arrival of refugees from Rumania brings little in the way of fresh reminders of who we are, because their cultural patterns have been influenced by those of Rumania (just as we here have been influenced by American culture). Whether through music, art forms, or even mentality, Rumania north of the Danube is alien to us. Our culture and language are steeped in the mountains of northern Greece, southern Albania and Yugoslavia, and southwestern Bulgaria.

In these countries, we have lost hundreds of thousands to assimilation, but we still survive as a distinct ethnic group. This survival is itself an improbability, a quirk of history. But we in America are stranded from this homeland; we must turn to it and learn from it if we are to survive.

Our parents and grand-parents came and settled here. Since they knew nothing of diasporas or assimilation, nor of modern technology and culture, they could not have foreseen the dilemmas ahead. They worked hard to see that we got more of an education than they did–though this does not make us “smarter” than they were. We respect and appreciate what they’ve given us. The combined knowledge gained from parents, from schools, and from wide travel gives us an awareness of both old and new ways, and these are the raw materials from which we can forge a new approach to our own culture. That approach leads us right back to our patridha, our true homeland.

NOTE: The following partial listing of the Vlach villages I have traveled through in Greece and Yugoslavia may be of interest to readers (Vlach names in parentheses):