What’s In a Name?

We are known by an almost incredible number of names, and this has caused much confusion over the years.

Most of these names were given to us by other people. Our own people have two ways of pronouncing our name for ourselves: Roughly half of them, especially in the northern regions, call themselves Rumani, while the other half (in the south) call themselves Arumani, simply because of a dialectal preference for an “a” at the start of certain words. If we called ourselves “Rumanians” (the English translation of Rumani), we would be confused with the Rumanians north of the Danube–who, though their language is quite like our own, have a rather different culture from ours. The word “Aromanian” makes it clear that we are not talking about these Rumanians, and that is why most scholars now use “Aromanian.” The founders of the Society were of a northern tribe (known as the Farsarotsi) and they thus called themselves Rumani. They seem to have translated this literally when, in 1903, they gave the organization they founded the title “Romanian Cultural and Benevolent Society Farsarotul.” We have decided not to alter the title of the Society, simply out of respect for the founders, but in almost all other instances we will use the word “Aromanian.”

Some other terms and their origins (if known) are as follows:

Vlach–This comes from a Gothic word meaning “Roman,” and it is a very common designation for us in English (for example, this is the only title we are listed under in the Encyclopedia Britannica). The Slavs learned this word from the Goths, and so it has continued to the present; in fact, the Poles still refer to an Italian as “Wloch” and to Italy as “Wlochy.”

Vlachos–This is the Greek version of “Vlach,” but due to our longtime association with sheepherding, it has come to mean simply “hillbilly” or “bumpkin” (most Greeks do not know that it meant “Roman”). Derogatory.

Choban–Albanian for “shepherd,” due to our domination of that occupation over the centuries.

Tsintsar–Another Slavic term for us, used mainly in Yugoslavia. Origins unknown, but thought to imitate the “ts” sound so common in the Aromanian language. Derogatory.

Karagouni–Turkish for “black capes,” which our shepherds often wear in bad weather. 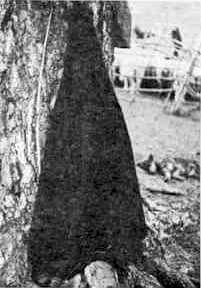 A black cape (tambari) used by our shepherds in foul weather.

Macedo-Romani–A term used only in recent times by Rumanians to describe us, based on their 19th century assumption that we were simply Rumanian nationals who happened to be living in Macedonia. Has political connotations.

Arvanitovlachi–Greek term for the Farsarotsi and other northern tribes who, instead of having Greek as their second language, spoke Albanian. Literally means “Albanian Vlach.”

In addition, a term has arisen amongst English-speaking Aromanians who were not satisfied with the literal translation “Rumanians.” To show that they were not exactly like the other Rumanians, they switched to the word “Macedonians.” Yet this can be even more confusing for outsiders, because nowadays that word refers only to a Slavic ethnic group or to the ancient or modern Greek residents of Macedonia, not to the Aromanians. The clearest word to use, and the one which lacks any derogatory or political connotations, seems to be “Aromanians.” 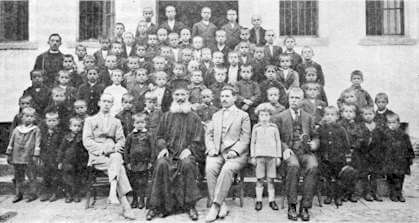 The genesis of a community: Many of the early members of the Society Farsarotul spent their childhood in and around Korche, Albania. Here, a school class of these Aromanians.

The lifetime members of the Society Farsarotul in 1956.
This community can be traced back to the Korche school.