Editor’s Note: Socrates Asteriou was a good friend and generous donor to the Society Farsarotul. He was very proud of his Aromanian origin and language. We are saddened by his loss. 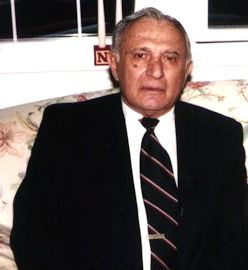 Socrates worked on the Balkan desk for many years. His love of history and intense study culminated in his being awarded his doctorate from the University of California (Berkeley). His dissertation was on the Communist movement in the Balkans. During retirement he was compiling a glossary of Balkan place names.

Socrates was suspended from his job at the State Department in 1956 during the heyday of Senator McCarthy’s personal exploitation of the Communist issue. Senator McCarthy had claimed that the State Department contained several hundred Communists and Socrates became a victim. While a graduate student at the UCLA campus and at the suggestion of one of his professors Socrates spoke before a group that was later labeled controversial. By simply grasping the opportunity to speak before a public audience, Asteriou became one of Senator McCarthy’s statistics. Socrates was not one to accept a false accusation with serious implications for his future without a fight to clear his name. This he accomplished during the subsequent two years. After all, Socrates came from sturdy Balkan stock. Both parents grew up under the hegemony of the Ottoman Empire and were survivors. With less than $600 to his name and no job he was fortunate to find an attorney to represent his case.

His fight was successful and Socrates was reinstated to his old job. While Socrates was fighting for reinstatement he completed and defended his dissertation. With the exceptions of stints as a history professor at the University of Kansas, Maryland and Swarthmore, Socrates remained at State until retirement.

During World War II Socrates fought with the 89th Division in Germany. He joined the 89th from the Army Specialized Training Program (ASTP). The ASTP and Air Cadet programs were abolished in the spring of 1944 to provide additional strength for Army ground force units preparing for the invasion of Europe. In early April 1945 the 89th captured a Nazi concentration camp and Socrates saw the incredible evidence of Nazi atrocities.

He is survived by his sister Mary Ligar of Rancho Palos Verdes, CA and his nephew George Ligar of Los Angeles. Burial was at Forest Lawn Cemetery in Los Angeles, where his parents are interred. –Theophilus Delianides

PrevPreviousVlachs Should Ask for Their Right to Speak Their Language
NextSam Tamposi: A Man Who Made a DifferenceNext

Sam Tamposi: A Man Who Made a Difference

Vlachs Should Ask for Their Right to Speak Their Language