We continue to receive interesting materials for our archives from our members.  Recently Pete Costulas mailed us a letter that the Society Farsarotul sent out in December 1943 to all young men serving in the U.S. military during the war, which we reproduce here:

“To our boys—wherever you may be: With pride we extend our most sincere and humble Greetings for a Bright Christmas and a New Year that will make your and our dream come true, by having you home again in our midst and live in peace forever after.  Until we meet again, may God protect you.”  It was signed by President Ilie Bici and Secretary Nicu Sp. Balamaci.

A newer organization, the Congress of Macedo-Romanian Culture, held its 10th gathering on 22-24 October 2010 in Bridgeport, Connecticut.  We will share any information that comes to us from the organizers when we receive it.

Endangered languages continue to gain attention around the globe and locally:

► We have been receiving materials regularly from the Endangered Language Alliance (ELA), which is located in New York – see their web site: www.endangeredlanguagealliance.org/main ELA held its first Town Meeting on June 5th, 2010 in Manhattan.

► We ran across a fantastic article in the April 29, 2010 New York Times entitled “Mamuju? Vlashki? Garifuna? In New York, You Hear It All,” by Sam Roberts.  Roberts, a longtime reporter on the New York City beat, writes, “The chances of overhearing a conversation in Vlashki, a variant of Istro-Romanian, are greater in Queens than in the remote mountain villages in Croatia that immigrants now living in New York left years ago…”

► Also in The New York Times: “In Multilingual Switzerland, One Tongue Struggles to Survive,” on September 29, 2010, discussing the survival of Romansh, a local language descended from Latin that is experiencing a rebirth in eastern Switzerland. 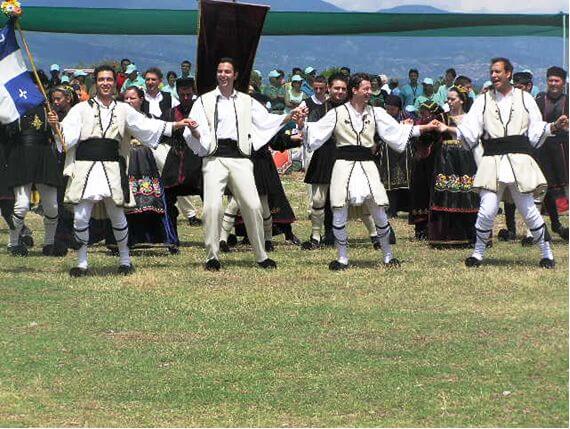 Vlachs dancing at the 2005 Andamuma in Katerini

PrevPreviousPanhellenic Federation of Cultural Associations of Vlachs: Letter of Information to the Council of Europe
NextFrom the Editor: The End of an IllusionNext

The Recent History of the Aromanians in Romania

The Recent History of the Aromanians in Southeast Europe

Vlach-speaking Vocal Music in the Western Balkans: An Introductory Note

From the Editor: The End of an Illusion

Panhellenic Federation of Cultural Associations of Vlachs: Letter of Information to the Council of Europe