We’ve heard of members of our community achieving distinction in the arts, such as Tony Award nominee David Pittu on the Broadway stage.  We learned of some recent successes by a few others: Saviana Stanescu, a playwright who is on the faculty of New York University’s Tisch School of the Arts, recently had her play, “Aliens with Extraordinary Skills,” produced by the Women’s Theater Project at the Julia Miles Theater on West 55th Street in Manhattan.  Stanescu is partly of Aromanian descent; in fact, her family hails from Pliassa, Albania, the home village of many (if not most) of the founders of the Society Farsarotul.  The play was well-reviewed in the New York arts community.  Another artist of Aromanian origins, Victor Babu, has chosen to make his mark far away from his native New York City; Babu a well-known and highly acclaimed creator of ceramic art, resides in Kansas City, Missouri, and taught for many years at the Kansas City Art Institute.  His work was recently exhibited at the Epsten Gallery of the Kansas City Jewish Museum, and the exhibit was featured in an impressive article in the September 2008 issue of Ceramics Monthly.  Babu’s family also came from Pliassa and Korçë, Albania, and his parents Thanas and Thoma Babu were deeply involved in the Society Farsarotul.  We wish both Babu and Ms. Stanescu continued success in enriching the world through their art.

Dr. Thede Kahl continues his untiring efforts on behalf of the Aromanian language with his publication of a Vlach translation of “The Little Prince.”  To find out how to obtain a copy, please write him at Thede.Kahl@oeaw.ac.at.

The Administrative Council recently announced that the dance we had hoped to hold this year will be postponed until 2009, as we await completion of the new St. Dimitrie church and hall in Easton CT.

There is at least one other active Vlach society in America: The Society Periovolea, founded in 1909.  Under the leadership of Chia Mihai, ably assisted by Maria Perdichi-Psomiades, the Society holds an annual dinner in New York that continues to be well-attended.  Those who want more information about the Society Perivolea can write to Mrs, Mihai at 23-30 33rd St., Astoria, NY 11105.

Not long ago we ran across an article in the English-language edition of Kathimerini, a major Greek newspaper (http://www.ekathimerini.com/4dcgi/news/content.asp?aid=69288), that described the life of Apostolos Katsiyiannis, a Vlach shepherd born in 1929 who still travels between his home in Kalarrytes in the summer and winter pastures in Kallithea, near Larissa.  The writer, Manina Danou, provided a wonderful snapshot of Katsiyiannis’s life then and now, and notes that, “the shepherds [who work with Katsiyiannis] are mostly immigrants  Here they are mostly Romanians, with whom Katsiyiannis, who is a Vlach, gets along fine – the Vlach dialect has similar roots to Romanian.”

You find Vlachs in the most amazing places – after a lifelong quest, in 2005 Volkmar Harvaneng, a 62-year-old member of the Austrian parliament, discovered that his father – who was separated from his wife and son during World War II – was 87-year-old Giorgios Pitenis of the well-known Vlach village of Samarina.  Their reunion was emotional.

We’ve seen a huge number of articles about dying languages in the last year or two:  A September 19, 2007 story in the New York Times discussed a collaborative project between Prof. K. David Harrison of Swarthmore College, Gregory D.S. Anderson of the Living Tongues Institute, and Chris Rainier of the National Geographic Society to identify and record endangered languages before they disappear.  An article in the October 20, 2007 issue of The Economist described the revival of Cornish in England – its last fluent speaker apparently died in 1777, but a revival movement began in the 1920s and now several hundred people speak it today.  Stories in the Economist on February 9 and October 25, 2008, eulogized Marie Smith, the last known speaker of the Eyak language of Alaska, and described efforts to save other languages facing extinction.  The New York Times on July 3, 2008 discussed the plight of the Ainu, an indigenous people of Japan with their own language, and on October 17, 2008 featured an article on how the Arapaho tribe of Wyoming are now teaching their young people to speak the language.

There’s more than one way to preserve a culture, of course: The music of Israeli singer Yasmin Levy was featured in the February 26, 2008 Financial Times.  Levy is one of perhaps 100,000 remaining speakers of Ladino, the Romance-based language of Sephardic Jewry, and she keeps the language alive in her songs, which are receiving critical acclaim.

An interesting fact for anglers and Vlachs: “the first reference to the sport [of fly-fishing] was by a Roman in the second century A.D. who described fishing with feathers in a river in a region near Epirus” in what is now Greece.  This quote comes from an article by Lou Ureneck in the Auguest 19, 2007 New York Times that described a lyrical fly-fishing expedition on the Louros and Kalarritikos Rivers in Greece. 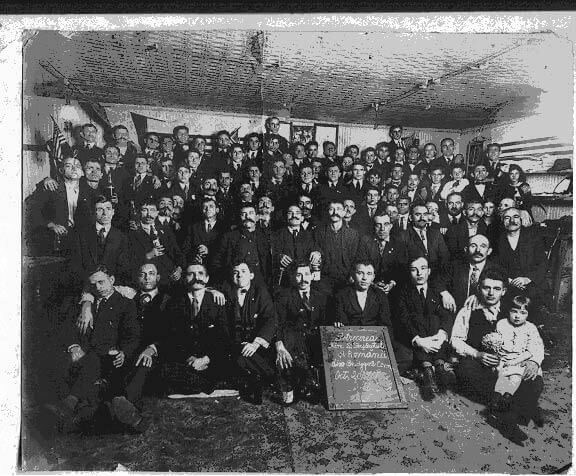 A classic Society Farsarotul photograph, taken in Bridgeport, CT, in 1917 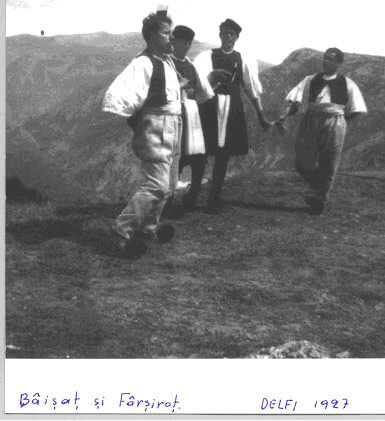 PrevPreviousUpdate on the Vlachs: A Visit to Uma
NextAspects of Language and Identity in the Greek Peninsula since the Eighteenth CenturyNext

Update on the Vlachs: A Visit to Uma