We welcome with great pleasure our newest member, Mr. Ovidiu Ocrain of Fairfield, CT. The number of new members increased markedly when the Newsletter first began publication, but it has since slowed down. If you like our publication but are not a member, we encourage you to join the Society Farsarotul; if you are already a member and know someone who might be interested in joining the Society, please pass along a copy of this Newsletter, complete with membership information and application.

Many years ago we were pleasantly surprised to find a dance group in New York City that was familiar with our culture and in fact knew more Vlach folk dances than we did. Known back then as the Balkan Arts Center, the group has since broadened its scope to include other ethnic groups and now calls itself the Ethnic Folk Arts Center (EFAC). This September, EFAC will be sponsoring a festival at Prospect Park in Brooklyn; one of the featured artists will be a Vlach folk singer from Greece named Andonis Kiritzis. He will sing with the renowned Halkias family orchestra, and he promises to include a few Vlach songs in his repertoire. EFAC has extended a special invitation to our community in America to come to this festival and sing and dance along with Mr. Kiritzis. The concert is part of a series known as “Folk Parks” and will take place on September 26th, 1993, from Noon to 8 PM. For information, call EFAC at (212) 691-9510.

Some interesting information about members of our community has appeared in recent years in the Newsletter of the Romanian-American Heritage Center in Jackson, Michigan. In addition to the autobiography of Dr. Haralambie Cicma (mentioned in Steve Tegu’s article in this Newsletter), they recently reprinted an article written by Fr. Vasile Hategan in 1945, when he was the priest at St. Dumitru Romanian Orthodox Church in New York. Entitled “The Romanians of New York City,” the article is a fascinating glimpse of those members of our community in New York who attended the Romanian church. Among the interesting tidbits of information: of the 84,675 Romanians reported in New York City during the 1940 census, only 2,000 were Gentiles (both Catholic and Orthodox) — the rest were Jews. Of the 2,000 Gentiles, about 800 were Vlachs (whom he calls by the Romanian term “Macedo-Romanians”) — a very high proportion, probably a majority of the Orthodox. Those of us who still recall our thriving community in New York can’t get over how quickly it fell apart. This is fairly typical of New York immigrant communities, whose 2nd and 3rd generations tend to move out of the city. In fact, that migration is perhaps the principal reason for the founding of this Newsletter, which seeks to maintain the bonds of our community even at a distance. At any rate, we recommend Fr. Hategan’s article highly; those interested in copies should contact the Romanian-American Heritage Center, 2540 Grey Tower Road, Jackson, Michigan 49201.

A recent study found six places in the world that require exclusive use of the dominant language: Algeria, Myanmar (Burma), Colombia, Greece, the federal district of Mexico, and Turkey. But the trend toward pluralism and multiculturalism will probably reduce this number in the years ahead.

Earlier this year, the Serbs in former Yugoslav Republic of Macedonia demanded changes in the Macedonian constitution, citing the fact that they were excluded from the ethnic communities mentioned. Only Macedonians, Albanians, Turks, Romanies (Gypsies), and Vlachs were included in the 1991 version of that document.

Dina Vanghele continues his crusade to help the Aromanians of his native Albania. As part of this effort, 56 boxes of clothing were distributed to more than 120 families in Korçë, Dishnitsa, Boboshtitsa, Voskopoje, and other villages. We are proud to note that the Society Farsarotul donated $896 to ship this clothing. Also, the building fund dedicated to raising money for a church in Korçë is growing, with pledges of $20,000 thus far — $10,000 of that from the Society Farsarotul. Mr. Vanghele’s effort is completely non-political; his aim is not to tell the Korçë Vlachs what to do, but to listen. A church is perhaps the most helpful thing we could provide our compatriots — it will help our community in Korçë survive by providing its members with a focal point. Mr. Vanghele is making another trip to Albania in September and it would be nice to see him receive another surge of donations before he goes. Tax-deductible checks can be made out to the Society Farsarotul, which will forward funds collected to Mr. Vanghele as part of our overall donation. Please give generously if you can.

It has been noted in this Newsletter that Vlachs are well represented among the leading members of the Greek-American community, including such well-known figures as the late Archbishop and Ecumenical Patriarch Athenagoras and the 1988 Democratic Presidential candidate Michael Dukakis. Here is another name to add to the list: George Douris, probably the best-known political leader in the Greek-American community. George’s parents hail from Perivoli, and he is related to several members of our community in New York and Bridgeport. A veteran of the Korean War, Douris worked for the now-defunct Long Island Star Journal for many years, most of them as that paper’s City Hall correspondent. He decided to use the contacts he developed there to help the Greek-American community and in 1971 founded the Hellenic-American Neighborhood Action Committe (HANAC), one of the best-known social service agencies in New York. George was recognized recently for his decades of service when he was presented with the Athenagoras Humanitarian Award of the Order of St. Andrew the Apostle — the most prestigious award offered by the Greek Orthodox Church. Douris closed his acceptance speech with a touching reference to his Vlach roots, noting this special link to the late Patriarch for whom the award is named, and calling upon his fellow Greek-Americans to recognize the contributions of the Vlachs to modern Greece. 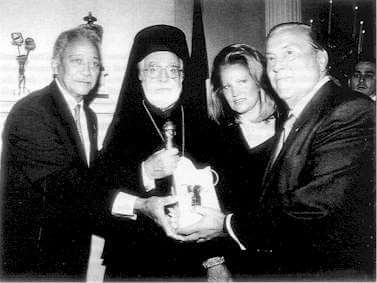 Our ties to the Albanian-American community have become stronger as more and more of our people have traveled to Albania and renewed old contacts. As we have taken more of an interest in the Albanians, the Albanians have taken more of an interest in us, and this is all to the good. Some of the organizations that serve the Albanian-American community may be of particular interest to readers of this Newsletter. The New England Albanian Relief Organization (NEARO) ships clothing, food, and supplies to Albania, and they can help you get things to your relatives there. Call 1-800-96-NEARO, or write NEARO at their midwest office address, 1200 West 58th Street, Cleveland, Ohio 44102. The Albanian-American National Organization (AANO) is an ethnic benevolent society and can be reached c/o Stephen Laska, 90 Park Avenue, Worcester, MA 01609. There is also an informative, bilingual newspaper called Illyria that is published twice a week in New York and distributed throughout the world. For subscription information, call Illyria at (718) 220-2000, or write Illyria Publishing Co., 2321 Hughes Avenue, Bronx, N.Y. 10458-8120.

From a recent article in a Greek-American newspaper: “The 250,000-strong Greek minority in the Former Republic of Macedonia demanded recognition and human rights guarantees in a proclamation sent on February 18 to heads of state and international organizations, according to a Macedonian Press Agency dispatch from Skopje. It said that the Organization of the Greek Ethnic Minority, a coalition that includes indigenous ethnic Greeks, Sarakatsanoi, Vlachs and former political refugees, demanded guarantees of individual freedoms and human rights accorded to all minorities. `We demand the restoration of our Greek surnames, which prove our origin and which we were forced to change under the powerful communist regime of Tito, and to speak our mother tongue, Greek, that our ancestors have spoken for centuries.'” Since the Vlachs are already recognized as a minority by the Macedonian Constitution (see above), the “Vlachs” referred to in this article are Vlachs in name only; if they are already Hellenized enough to consider their mother tongue and ethnic identity Greek, then for all intents and purposes, they are Greek.

Here is a bulletin we recently received from the Albanian Telegraphic Agency, the government’s in-house news service: “Tirana, February 12. On February 11, President Sali Berisha met Janko Ballamaçi, Chairman of the Wallachians’ Association. At this meeting, the representative of this association said that the Wallachians and Albanians are brothers and nothing separates them from their homeland, Albania. He submitted to the President requests of cultural character. He also said that the Wallachians residing in many countries of the Balkans are a factor of understanding in this region. President Berisha said that the preservation of the identity of other people contributes to…affirmation of the values, the mutual spiritual and cultural acquaintance with the people. “I am sure that the fulfillment of your just requests will enrich the font of your culture and Albanian culture in general. I will persist in fulfilling your rights.”

[Editor’s note: As we were going to press, we learned that Ianku Balamaci was no longer head of the Aromanian Society of Albania — see Editorial.]

Five months later, Greece and Albania were at the height of a war of nerves over the expulsion of a nationalist Greek priest from Albania — the Greeks retaliated by expelling Albanian immigrant workers, legal and illegal, from their country. Greek nationalists renewed their claims that there are 400,000 Greeks in “Northern Epiros” (the Greek nationalists’ term for southern Albania). Mindful perhaps of the fact that the majority of those claimed as Greeks are actually Vlachs, who could weaken the Greek claim significantly if they declared themselves something other than Greek, President Sali Berisha made an interesting statement on July 6th (this account is taken from The GreekAmerican): “During talks with Romania’s foreign minister, who was visiting Tirana, Berisha praised the position of the Romanian Orthodox Church, which he said did not attempt to appoint Romanian clergy into the Albanian Orthodox Church despite the existence of Romanians in Albania. The Romanian foreign minister said that `Romania maintains friendly relations with both Albania and Greece.’ He then offered his country’s offices to help overcome the crisis in Greek-Albanian relations.”

From The GreekAmerican we learn that Greece is now determined to develop its Epiros region, with the Vlach town of Metsovo as a focal point. This will no doubt stimulate the economy of this mountainous and inaccessible region; ironically, it may also signal the beginning of the end of the Vlach language, which has survived only in areas that stayed behind the times and has disappeared when development arrived. One of Europe’s most modern conference centers was built in Metsovo in 1991 (in traditional Metsovo stone design); the center can accomodate up to 180 participants and features a stage, video and film projectors, and simultaneous translation booths that can handle up to 4 languages (is ours one of them, I wonder…). There are 15 double and two single accomodations, each with a breathtaking view of the Pindus mountains, and breakfast and 24 hour meal service with menus based on Metsovo’s traditional cuisine. The people of Metsovo have pursued other economic development strategies, from reviving ancient crafts like cheese and wine making, wood carving, and weaving, to the creation of ski lifts and a cross-country ski run on nearby Mt. Karakoli. Sounds like the perfect place for a Society Farsarotul junket. For more information, contact the Greek National Tourist Organization, 645 Fifth Ave,New York, NY 10022, phone (212) 421-5777.