At least three Romanian Orthodox churches in America were founded by our Aromanian forefathers: St. DImitrie in Bridgeport, CT; St. John the Baptist in Woonsocket, RI; and St. Dumitru in New York, NY. One way the members of these churches kept in touch with their Aromanian culture was through a series of plays produced both before and after World War II.

Having performed in the 1961 production of the play “Haida” under the direction of the best-known Aromanian drama producer, Michael Costulas, I found that researching and writing this article rekindled fond memories of performing with first-generation Aromanian Americans, including Thomas Carameta, Carol Balamaci, Cheryl Lambro, Cynthia Sholler, Diane Fekete, and Richard Rigia. It appears that the social significance of the early plays — those performed between 1928 and 1933 — was to offer audiences dramatic arts in their native language. The later plays, however — including the 1961 performance cited above — seem to have been intended by parents and grandparents to teach the Aromanian language to their high school-aged American-born children. While performing in the drama did not make us dluent in the language, it did expose us to vocabulary and diction not frequently used in our otherwise rather American lifestyles.

The challenges of adjusting to a new life in an adopted America during the Great Depression years, and a nostalgia for the less complicated way of life of their homeland, led our forefathers to turn to drama as a possible outlet for these feelings. Curiously, the actors in the first documented production, “Golfu,” in 1928, were predominantly males, while plays presented in later years featured casts that were exclusively female. 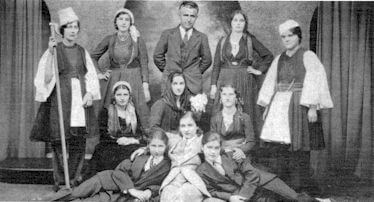 Most of the plays were sponsored by the St. Dimitrie Church Ladies’ Auxiliary and were produced and directed by Michael Costulas. George Cashavelly presented the play “Maria” in 1933 and 1936. Michael Costulas offered “Golfu” in 1928 and 1954, “Esmea” in 1952, “Haida” in 1962, “Vruta al Picuraru,” “Everdiki,” and several others whose performance dates were not documented.

Michael Costulas used Greek plays as the basis for his scripts; he painstakingly translated these texts into Aromanian. Both the Costulas and Cashavelly plays were tragedies of the order of “Romeo and Juliet,” in which the hero and heroine usually commit suicide or are killed. I was amazed to discover the volumes of manuscripts and audio tapes Michael Costulas created as a legacy to future generations. One could imagine the countless hours this talented individual spent researching Greek plays, translating them, and neatly writing out scripts for each actor in notebooks; add to that the responsibility for casting, scenery, props and costumes. I am convinced that the performing arts were his labor of love. Audio tapes of Costulas singing or reciting Aromanian works reveal the extraordinary humor he introduced into such classics as “Dada, voi s’mi nsoru.” I hope to publish some of his songs in future issues of this Newsletter.

Michael Costulas was born in the town of Shube in the Greek province of Thessaly in 1895. He had lived in Woonsocket, RI and Blackstone, MA, before settling down in Bridgeport, CT, with many of his fellow Aromanians. His wife Jenny and children Peter, Despa, and Ellen were active members of the Church; Peter served as both President and a member of the Board of Directors of St. Dimitrie. As the owner of Sperco Typesetting Services and editor of various commemorative journals, Peter was also responsible for documenting much of the published history of that Church and its parishioners.

Like other contributors to the Newsletter of the Society Farsarotul, I am eager to document our Aromanian culture with the written word for generations to come. Along this line, I congratulate our predecessors Michael and Peter Costulas for their efforts to preserve our culture.

We are approaching the 30th anniversary of the last performance of “Haida.” I propose to all Aromanians of younger generations that we produce an original or derived drama of our own at the 1991 Macedonian-Romanian Congress. Performed in Aromanian with English subtitles, the play could provide a valuable learning experience for second- and third-generation Aromanian-Americans. If you have interest in such a project, phone me at (203) 384-1510, or write me at 472 Stratfield Road, Fairfield, CT 06432. 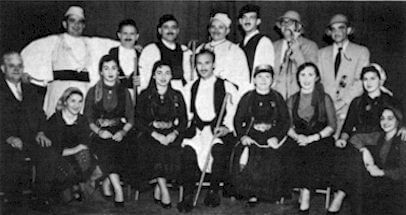