A Tale of Two Countries

The past is another country, and on my first visit to Kephalovriso or Migidia I thought a lot about its past and my past. Since it was such an important place in Vlach history, legend, and song I felt I should have visited it earlier. After all, its Greek name, meaning “head of the waters,” entitled it to some consideration as a prime site. But when working on the Vlachs in the 1970s and ’80s I was short of time and money, had children to support, no wife to support me, and made most of my visits on foot or on slow uncomfortable Greek buses. And Kephalovriso seemed very remote.

Now it is all different. Kephalovriso is easily reached on a good tarmac road in about an hour from Ioannina. I have plenty of time and money, can hire a car, have a kind wife to drive me, can drink with the local inhabitants, and have no excuse for not visiting as many Vlach villages as I like.

Of course the challenge is part of the charm. After a day in which I had visited not only Kephalovriso but the Greek village of Molyvdoskepastos with its fine Byzantine churches and had a picnic in the Vikos gorge near a handsome Turkish bridge I remembered with nostalgia less successful Vlach ventures.

One involved getting up at four in the morning to catch a bus to a village which had no Vlachs and no buses until six in the evening. I remembered nearly falling off mountains and getting lost in barren places, inhabited by giant tortoises. Left or right, my wife asked kindly, as I asked kindly whether she would like beer or iced coffee. The tortoises were less kind.

There was one small tortoise and plenty of both beer and iced coffee in Kephalovriso which has a bank, a post office, several shops and a wide range of restaurants and bars. I did not see any hotels. We were staying at a very luxurious hotel at nearby Bourazani halfway between Kephalovriso and Molyvdoskepastos, on the Greek Albanian border.

Everyone, as always in Greece outside the tourist resorts, was very kind to the tourist. I made friends easily with three men who assured me that the whole village spoke Vlach. And yet, as I wandered round its broad streets, I only once heard Vlach spoken. Prosperity had been derived from inhabitants working in Germany, and I spoke to my new friends in broken German. They recognized my broken Vlach, but did not leap to speak it. New houses and churches, like the new roads, paid for by the European Union, were welcome witnesses to the new European prosperity.

Kephalovriso is the chief town of its particular district. Its mayor, a charming Vlach, was in charge of the festival at Molyvdoskepastos. He introduced me to two friendly Vlachs, and asked my wife to join in the opening dance. She performed very well, but regrettably my Vlach speaking like my dancing never really got off the ground.

Kephalovriso was not always so prosperous. A look at the map will show that Kephalovriso, though standing at the head of the Kalamas river, flowing from North to South, is also neatly placed between the two rivers flowing from South to North which provide the routes between Albania and Greece, the Drino and Vjosë rivers which join at Tepelenë. Maps are not always reliable in this area, since there has been a great deal of road building in Greece and none in Albania with the result that the standard map of Albania shows as major roads in Albania tracks which are now impassable, whereas it does not mark at all the present first class road from Kephalovriso to Ioannina. But maps do show rivers well if not roads. The Drino and Vjose rivers have always been used – by Roman generals, invading Slavs, and wandering Vlachs, among others. In Ottoman times the main road from the coastal plain near Butrint joined the Drino at Muzinë, climbed up via Kakavia to Kalpaki, and then went down the Vjosë to Leskovik where there was a route to Korçë. The erection of the Greek Albanian frontier meant that this particular road involved crossing a border twice, and thus the Italians built a new road, still just about feasible today. This involved going down the Drino to Tepelenë and up the Vjosë to Leskovik.

A great many Vlachs have passed through Kephalovriso. Many had never had settled homes, but were going from winter quarters on the Albanian coastal plains to summer pastures in the Grammos mountains. Some travelled still further, turning South at Kalpaki and then East at Ioannina to cross the Pindus mountains and winter in the Thessalian plains. Others did not travel so far, preferring instead to find summer pasturage in the hills near Kephalovriso, the area now divided between Albania and Greece, known as Pogoni.

The Balkan wars created new frontiers, the First World War made these frontiers fairly meaningless, but somehow the Vlachs continued to make a biannual pilgrimage even if it meant crossing borders with or without a passport. The English archaeologist Clarke, whose notebooks describing journeys in Epirus during 1923 and 1924 are in the British School at Athens, is full of information about Vlachs whom he met both in Pogoni and on the Albanian coast. Rather shockingly he describes hostility to them from some Albanian villagers on the grounds that the Vlachs were thought to be very dirty.

The Second World War spoilt the old way of life. There was a nasty campaign between the Greeks and Italians. Pogoni was liberated but remained on the front line,. The Germans burnt some villages, more suffered in the civil wars between left and right which had different results in Greece and Albania. Some Greek speakers in Albania fled to Greece, while Albanian speakers in Greece were expelled to Albania. And in 1946, as I heard repeatedly in Albania, many Vlachs based in Kephalovriso were moved to new places in Albania, being presumably caught betwixt and between.

Again and again looking for an ancient origin for Vlachs in southwestern Albania, either near Sarandë or along the Drino valley near Gjirokaster or along the Vjosë river near Permet, I heard the magic if disappointing word Kephalovriso. People of my age who could just remember the Second World War could also remember Kephalovriso and remembered their migrations. The Communist regime in Albania with a mixture of cunning and compassion placed the Vlachs as a kind of buffer between Greeks and Albanians since they were both and neither. Sometimes Vlachs were placed in sites where there had been a Vlach presence beforehand, as along the Vjosë river near Permet. Vlach shepherds had also kept their flocks in the plains near Sarandë, but had left no permanent settlement. Hoxha after a time did provide a kind of housing for these nomad Vlachs, although of course he confiscated their flocks, destroyed their way of life, and cut them off for forty years from contact with their fellow Vlachs.

Vlachs in Albania have usually in the last decade found it easy to obtain work permits in Greece. I met a little colony of people from Pleasa in Salonika, earning money working on a building site. As a result, many villages in Southern Albania, Greek and Vlach alike, are deserted even at Easter. Such abandoned villages seem a far cry from the bustling cafes of Kephalovriso where my friends remembered with pity their cousins who had moved to Albania, while these Albanian cousins remembered their Greek relatives with envy.

Both parties blamed Communism for this sad difference. And yet it is not Communism, which is of the past, that divides Greece and Albania. If Europe can build roads to the frontier why can’t it extend these roads to Albania, bringing work, new houses, and prosperity to Vlach-speaking,

Greek-speaking and Albanian-speaking villages full of churches and surrounded by beautiful scenery?

If Ecotourism can support our pleasant hotel at Bourazani why can’t it support much more interesting sites like Voskopojë?

Of course Kephalovriso, though prosperous, is not very Vlach, while Voskopojë is very Vlach and not very prosperous. Nostalgia for a vanished way of life and affection for the Vlach language must not blind us to the fact that almost everyone would prefer to be prosperous than Vlach. Extreme Vlach nationalists who claim that Vlachs are an oppressed and persecuted minority should meet the merry citizens of Kephalovriso. Whether these citizens will or should preserve their language and their customs or anything except a vague feeling of being Vlach is a hard question to answer. The future is an even more different and difficult country than the past. 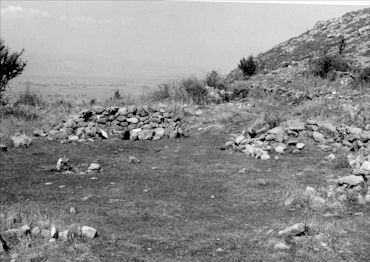 PrevPreviousDid You Know What Others Have to Say about Us?