The Survival of Vlach in Anilio 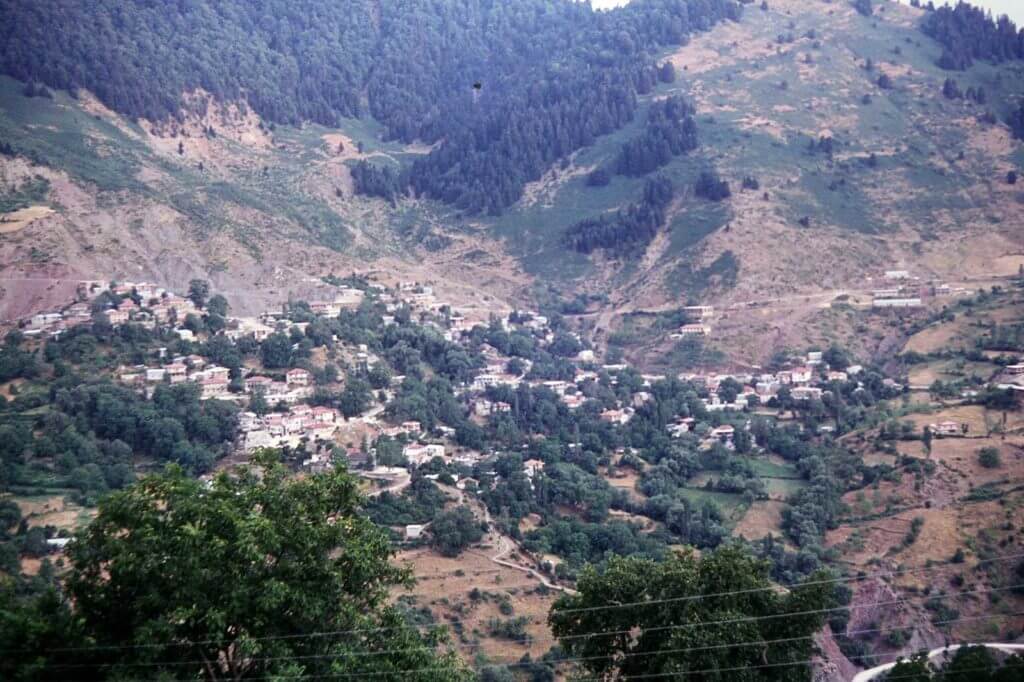 Of all the Vlach villages I have visited in the Balkans my favorite is Anilio, situated just south of Metsovo, the main Vlach town of Greece in the heart of the Pindus Mountains. Anilio was the first Vlach village I visited, and the one in which I have the most friends, although it is not difficult to make friends in the Vlach villages. Rather lazily I now go to Anilio to renew these friendships as a form of relaxation from work on the Vlachs and other subjects.

Perhaps this laziness is a mistake. Anilio is probably the village in which Vlach is at its most healthy. One hears more Vlach than Greek in the cafes and the children speak Vlach to each other and their parents. Fifteen years ago the children used to greet me in Vlach, but now they try and practice their English on me, and there are signs that Vlach is slightly on the decline. But the future of the language in Anilio would seem assured in normal circumstances until the year 2050.

There are various reasons for this relatively healthy state of affairs. Metsovo is situated at a key point on what used to be the only (and is still the best) road across the Pindus Mountains. It is just off this road and therefore it does not attract too many strangers, although in recent years there has been something of an explosion in the tourist industry. Anilio is almost part of Metsovo, but it takes three-quarters of an hour to walk from one place to the other (half an hour by car along a circuitous road), since the two are divided by a river running through a deep ravine. Thus Anilio even more than Metsovo is sufficiently remote to preserve its Vlach identity and sufficiently central to preserve its identity as a village.

Political factors have also played their part. Before the First World War, when both Anilio and Metsovo were part of the Ottoman Empire, the inhabitants were fanatically pro-Greek. Some people tried to set up a Vlach [Romanian] school, but they were expelled from the village. I heard this from an elderly woman, Mrs. Polyxena Karamichas, whose Greek, though a great deal better than mine, was still hesitant. She said that some of her contemporaries had really not learned to speak Greek at all. But, though weak in the Greek language, the village was strongly Greek in sentiment; as a result, it did not sustain a huge loss of population to emigration. Mass emigration between the wars to Australia and America was common in many Balkan villages, often for economic reasons, but in studying Vlach villages I have found it more common in areas where there was some feeling of a separate Vlach identity. In some cases, the inhabitants of these villages actually left for Romania.

In the Greek Civil War Anilio was bitterly opposed to the Communist faction whereas several Vlach villages further south were on the side of the left. Feeling still runs high between these villages, and some people seem surprised that I have friends in both camps. In any event, Anilio was on the winning side and prospered as a result. It did not suffer a population loss as did many other northern Greek villages when the Communists lost and left for other countries in Eastern Europe, sometimes taking a number of children with them. In these Vlach villages, it is not unusual to find the old men and women speaking Vlach, people of my generation understanding Vlach but not speaking it, while the children neither speak nor understand it. It is in these villages, not in Anilio, that the language is on the verge of extinction.

I hesitate to use this picture of the generations because on this visit to Anilio I took with me my eighteen-year-old daughter, who had last visited the village at the age of six. She noticed differences I had not observed because I visit the village so often and one does not notice gradual change. Improvements in the road to Metsovo have led to changes in Anilio. Old houses with roofs of slate or corrugated iron are now the exception rather than the rule, and they are often falling into disrepair like the old paths, being replaced by proper streets. Cars are seen more often than mules. New cafes have sprung up with smart bars, shiny tables, and modern chairs.

My daughter mourned the passing of the old way of life nostalgically, and I had to remind her rather sharply that she had not been too keen on the primitive culinary and sanitary arrangements we had faced on our first visit. It is difficult to condemn people for wanting the same refinements that one takes for granted for oneself. I saw, however, that the advance of civilization was a threat to the survival of Vlach. New roads bring in strangers and take out Vlachs to places where the language is not known. A Vlach housewife with a washing machine has more time to watch Greek television and less time to gossip with her Vlach neighbors as she struggles with the weekly wash at the riverside.

These changes, however, will fade into insignificance when compared to a major revolution that is coming within the next five years. A tunnel is being built very close to Anilio. The object of this tunnel is to improve the road from Igoumenitsa to Volos, which passes just north of Metsovo. At the moment the road, shortly after leaving Metsovo, climbs steeply by a series of hairpin bends until it reaches the Katara Pass, more than 1,600 meters (one mile) high. Despite the heroic efforts of a team of snowplows, this road is often closed in winter. I have passed through the Katara in a bus on easter Sunday when the snow had obliterated the six-foot-high posts set up to mark the edge of the road.

With the tunnel, there will not be the threat of snow and the journey will be much shorter. Goods coming from the Middle East can be shipped to Volos, pass rapidly across the Pindus Mountains, and then go by ship to Italy. The present alternative is a long journey by a dangerous road through Yugoslavia. Both Italy and Greece have much to gain from the tunnel, and a team from both countries is now working on it. Tourists, too, will find it easier to get to northern Greece.

Both tourists and transporters will need a break on their journey. The present route has very few places where one can draw off the road to park in safety. Even Metsovo is not exactly suitable since it is off the main road, and parking is limited in the town. But the new road will pass very near Anilio, which also has plenty of room for parking.

At first sight this development would seem to be a disaster for the Vlach language. I have already shown ways in which the march of modern civilization, though inevitable and in many ways desirable, is inimical to the preservation of a minority language like Vlach. The new road will accelerate the march both for Anilio and for the Vlach village of Panaghia on the other side of the tunnel. Advertisements for the last gas station or the last hamburger stand before the tunnel are unlikely to be written in Vlach. I have observed Italian construction workers trying to communicate — not very successfully — with Vlach villagers in a kind of basic Latin, but the increased Italian presence as a result of the tunnel is not really going to strengthen Vlach any more than the abortive attempts of the Italians during World War II to recruit the Vlachs onto their side as fellow Latin speakers. These efforts gave the Vlachs a bad name, even though very few collaborated with the Italians.

On the other hand the new road near Anilio might just prove to be the salvation of the Vlachs. There may be archaeological revelations as a result of its construction, and these might be able to resolve (as I have not been able to resolve) whether the Vlachs in the Pindus have been there since Roman times or are more recent arrivals. I have asked people in the village to keep me informed. In addition, the new road will bring the Vlachs to the attention of the world. People passing through Anilio will not be able to help noticing that its residents speak a different language, and intelligent travelers will become interested in the Vlachs.

Recently I gave a rather light-hearted lecture about the Vlachs to students at Oxford University. These students were duly impressed by my traveler’s tales, but some of them thought I had invented the Vlachs. Similarly, on hearing that the British Academy has granted me a large sum to fly ’round the world to investigate Vlach communities in America and Australia, sober taxpayers like my brother think I have invented these communities as an excuse for circumnavigating the globe. In Anilio they believe in the Vlachs, and the new road will show that this belief is well-founded.