The Return of the Native

A single event can change a person’s life. My journey to war-torn Baieasa (in Greek, Vovousa) in November of 1945 was such an event.

At the time I was stationed in Santa Maria, one of the Azore Islands. I was a pilot with the rank of captain and aide-de-camp to the commanding American general. I decided to go to my home town in Greece on my annual leave. The flight took me to Cairo, Rome, and finally Athens. In Rome I was joined by two servicemen, Sgt. Ernest Mallios and Pericles Lavorites of Worcester, Massachusetts.

In Athens we found out that the United Nations Relief and Rehabilitation Agency (UNRRA) needed to get one of its trucks to Iannina. We qualified as the crew. The journey was both exciting and sad. There were improvised roads, temporary bridges, and burnt villages. We had to ford rivers. The people we met on the way were unforgettable. They had the ability to recover rapidly from catastrophes. They had courage, resilience, endurance, optimism. Centuries of wars and hardships had tempered them like fine steel. The could still smile! Greece was being reborn.

Lavorites went to the Albanian border. Then as now no one could enter or leave Albania. He was allowed two hours to talk to his father and mother. What tearful hours! I proceeded to Flamborari to meet my aunt Avgena Shafaca. I arrived on a cold night in the misohori (village square) and fired my carbine to announce my arrival. A few minutes later, my saint-like aunt arrived. She was dressed in black. She had lost her only son in the war. We embraced and wept. I had not seen her in 24 years! She and her husband, Theodore, were living in a shack. The next day, she accompanied me to Baieasa.

Aunt Avgena directed me to the house of Nicolai Brajituli, who had two daughters, Eleni and Catherine, and two brothers, Michael and Nando. The boys were fascinated with the carbine I had brought along for protection.

My arrival was a joyous occasion for the people of my village. The “reception committee” consisted of the entire village, all smiling and eager to hug me. What a homecoming! Although absent for more than two decades, I still had a good command of my native Vlach, thanks to my parents who insisted that we speak only Vlach in our home in Vermont. I was completely at ease speaking our language. I was wearing the uniform of the U.S. Air Force but I was one of the townspeople. The native had returned.

Returning to my home town after the war was a decision that changed my entire life. Having the status of a foreigner is a strange experience. It was a kind of metamorphosis, a period of transition. I was not entirely American; yet, I had changed too much to pass as an authentic Vlach or Greek.

This experience shook me up and gave me a lot to think about. Like all immigrants, I was anxious to become an American and to dissociate myself from the Old World. There were times I was ashamed of my foreign origin. It was not a pleasant situation. I used to dread my mother speaking to me in Vlach in the presence of my American friends. In fact, I was terribly embarrassed even when she spoke to me in English, because her English was terrible. My mother had had very little schooling and I was ashamed of her. Much later in life, I discovered that she was storehouse of valuable information. She could sew, embroider, card wool, spin, and weave. She could bake. Her skills were unlimited. She knew when to plant. She could even tell time by the morning star!

A great transformation took place in my personality and my outlook on life and the world. In the United States, I was one of more than a hundred million people. In Baieasa, everyone knew me! Imagine my surprise and delight when I discovered that my name, along with those of other young men of military age from Baieasa, was on a list nailed to a huge tree in the village square. I had been called to fight in the war against the Italian invaders of Greece! It was as if the clock had stopped in Baieasa. It mattered little that I had been absent for 24 years — I was still a Vlach from Baieasa. Here I was surrounded by relatives and villagers who knew my father and grandfather. My grandfather had been the town’s inventor, millwright, mathematician, and all around genius. They remembered that he had built a wooden clock. The people even remembered and talked about the time I nearly drowned in the river.

A great battle had recently been fought in Baieasa. An Italian brigade had been trapped in the narrow defile of the Aous River which runs through the village. Blood had flowed. Later, the Germans had come. Guerrilla attacks. Houses burned, the village destroyed, men taken prisoner. Food was scarce. And yet, these people would invite me to dinner and place all they had on the table, even if it meant their going hungry the following week. What resilient people — they had suffered excruciatingly, and yet they were able to smile, laugh, joke. Beneath the homespun clothing were great men and women. I was so happy to return to my village; I was overwhelmed by the kindness, generosity and joie-de-vivre of the villagers. At last I had found myself. In my efforts to become American, I had forgotten who I really was. Now at 34, and in dramatic circumstances, I had rediscovered myself. I was proud to be one of the villagers, a Vlach from Baieasa!

When I departed, everyone — men and women, old people and children — came to the edge of the village to bid me farewell. What warmth and hospitality!

I had aquired a Contax 35mm camera in Rome; with it I was able to document my odyssey in some 300 pictures. My favorite is the one appearing with this article; I am dressed in the Vlach traditional costume and flanked by Eleni Brajituli (left) and Catherine, also in native garb. Another favorite is the one of Catherine fetching water from the Aous River in Baieasa (see “The Young Woman and Her Ghiume” in the August 1988 Newsletter). When I returned to the Azores, I placed these two photographs on my desk. They served as constant reminders of my glorious adventure. Not only had I found myself in Baieasa — I had also found my future wife. Two years later I proposed by letter. We were married in St. Johnsbury, Vermont in August 1947. 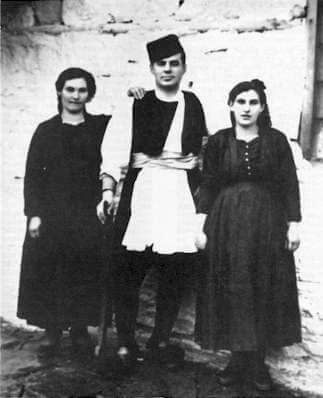 Our marriage has been a glorious adventure as well. Who says that marriage creates stagnation and immobility? Vlachs are adventurous people. Nomadic habits do not die easily, especially not in the Tegu family. Our three sons, Steven, Peter, and Alexander and our two daughters, Janine and Andriana, have visited Greece three times. They know all about Baieasa. Our wanderlust is insatiable. My wife and I spent two years in Germany and two years in France. The entire family spent eight years in Spain. The climax of our nomadic adventures was a camping trip, complete with a Sears Roebuck tent: The seven of us covered every country in Europe, Turkey, and parts of north Africa, covering some 10,000 miles without ever sleeping in a hotel! When you marry a Vlach, you may have hitched your wagon to a star!

What a joy it is to be a Vlach!

PrevPreviousA Letter to the Editor
NextDid You Know What Other People Say about Us?Next