The ICOANA: Holy of Holies in the Vlach Home 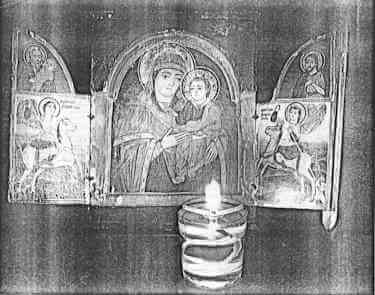 This is a photograph of the icon that we had in our home in Baieasa, and it is the only spiritual link that we have with the village of our origin. Needless to say, in our old home in Greece it was considered holy and treated with respect and reverence. We don’t know exactly how old it is, but we estimate its age between one hundred and one hundred and fifty years. Although it has suffered the ravages of time, travel, and dampness, it still retains a good portion of its beauty and mystique.

This type of icon is known as a triptych, or triple panel. It has an image in the center and two images on the panels which are hinged by looped wire embedded in the wood. The colors are earthy: dark green, yellow, ochre, red, and white. It was probably designed to be carried because of its compactness. The Virgin’s halo and those of the saints and the Christ child are of gold leaf. It is likely that the same monk who made the icon also did the gold-beating. This was done by placing a small gold coin between two thongs of leather and then beating it with a wooden mallet until the gold leaf was thinner than cigarette paper. We think that it was probably made in one of the monasteries of the Meteora, as they are located in the general vicinity of our town. These monasteries formed an active religious center even during the 400 years of occupation by the Ottoman Turks.

The icon, together with some vilendzi (heavy woolen blankets), pillowcases, and a pair of hand-forged shears (the work of my grandfather), are all we have of the old world in our house here in Providence. When we bought our house my wife and I decided that after we signed the papers and the house was legally ours we would “take possession” with a ritual. We Vlachs are ritualistic people and we wanted to pass some of these rituals on to our sons and daughters. One that we practice constantly is the placing of a small glass of wine on the threshold of the house when we leave to go on a trip. After the door is closed and locked, the glass of wine is kicked over, spilling it. This assures a safe and pleasant journey.

We brought our ancient relic into the house, wrapped it in a cloth of blue velvet, and placed the icon on the mantelpiece over the fireplace. We didn’t take into account the impression this would make on the former owner of the house, who was present for the ritual. Of course the house had been a personal and intimate possession and she hoped that the new owners living in it would care for it and not desecrate it. You can imagine this woman’s joy and ecstasy when she witnessed this solemn ritual, for she was a retired Catholic nun.

Our icon had witnessed few joys and many sorrows from its niche in our home in Baieasa. Like all Vlachs, we had to “export” most members of our family if we were to survive economically in the harsh environment of our town. First, our eldest brother left to seek his fortune in America, followed by two of our sisters and finally our father. My mother, a brother, a sister, and I were were left behind, awaiting the day when the ones gone overseas would save enough money to pay our passage. Ten years went by before this happened. My mother and father had wasted ten years of their lives separated by the Atlantic Ocean. It was a cruel separation. When we finally arrived in Keene, New Hampshire, I could not get used to my father. I simply could not call him tata (father), but instead addressed him as lala (uncle), which is the way a child addresses a stranger.

I believe that the people who stay behind suffer more than the people who go overseas. The ones staying behind are constantly wondering what has happened to their loved ones in strange lands. How could a child (or any other person in our town, for that matter) who had never been more than a few miles from home imagine what Water Street looked like in Keene, New Hampshire, or what a shoe factory was like in Worcester, Massachusetts? To us, the xeani (foreign lands) were a kind of mythic fairy land. Sometimes my father would send money by a Vlach who was returning to our village. At times, the person bringing the money decided that he needed it more than we did. A letter from America would sometimes take two months. And generally the letter would say very little because of the primitive language in which it was written.

In times of trouble there was no one to help our mother. And there was usually plenty of trouble. We were never sure if we would have enough food or if the few domestic animals we had would survive the winter. Why hadn’t we received a letter from America for so long? We were often sick due to malnutrition, and when one of us was running a high fever, there was no medicine, no doctor, no hospital. Our mother would light a taper and pray to the Virgin for help. The taper was lit on Wednesdays, Fridays, and Sundays. Even if we did not have enough olive oil for our own needs, the Virgin’s share (for the candila; see the August 1988 Newsletter) came before everything else.

The Christ child appeared to me too big to be a baby. He looked more like the boys I played with. But then, I thought, He is the Son of God and so He must be different from us.

Flanking the virgin on the right and left panels are youthful St. George and St. Demetrius riding ponies and each carrying a lance. St. George is slaying a miniature dragon and St. Demetrius is killing what I suppose is Satan. As a child I used to think that these two saints were the protectors of the Virgin. Whenever my mother requested something of the Virgin that was too difficult for her to comply with, the two saints would ride to her rescue on their tiny steeds. [“Editor’s note – This icon is extremely significant because it symbolizes the Vlach lifestyle in the old country: St. George’s Day, April 23, marked the date on which the first people left the lowlands for their summer village each year, and St. Demetrius’s Day, October 26, marked the date the last of them returned to the lowlands. In between these two great feasts, when the whole village was together, the most important feast (and the climax of the entire summer season) was the Assumption of the Virgin Mary on August 15, when most weddings were held and betrothals made, and the merrymaking of• Sta. Maria “(as the feast of the Assumption is called in our language) continued until the lesser festival of St. Mary on September 8.]

Writing about our family icon and photographing it in the dim light of the candila (taper), with the smell of burning olive oil, evoked many memories of my childhood long ago in Baieasa. I relived the moments when my mother, in a crisis, prayed so desperately to the Virgin for help (see the August 1988 Newsletter).

To our readers: Prof. Tegu welcomes correspondence and questions; you may write him at 24 Claremont Avenue, Providence, RI 02908.