Cofas such as those shown in the photograph below have always been some of the most beautiful and popular utensils in the Vlach household. They are the products of the town cooper, who made barrels and other wooden containers — a profession that has all but disappeared in these days of steel and plastic. The cofa was made of hard wood, with the round sides being turned on a foot-powered lathe. The parts fitted so well that the cofa could hold a liquid — usually water, but on festive occasions, it would be filled with wine. The cofa was bound with brass hoops, which enhanced its beauty, and it was decorated with brass studs, forming a geometric design. On important occasions such as weddings, wine would be poured from the cofa, and accompanying rituals and ceremonies would be performed. The cofa thus came to be associated with happy occasions. 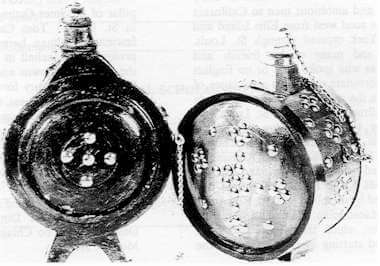 The Offering of Food and Drink

My wife and I offer food and drink to people who visit us. Even in America, this old Vlach custom is hard to shake off. This very basic and important human ritual has a long and interesting history — and it figures prominently in Greek mythology. In the old days, throughout the world, travel meant discomfort and often danger. The guest generally came on foot or horseback, over considerable distance, and when he arrived at his destination, he was tired and probably thirsty and hungry, too. Providing the guest with drink, food, and a comfortable seat or other resting place was the expression of true hospitality. And the hospitality did not end there, for when the guest left, the hosts might put an additional helping of food into his pocket, to be eaten on the road.

Recently I visited an aged Jewish woman in a nursing home. When I was about to leave, she put a banana in my pocket. Had I not been from a traditional society myself, I might have been puzzled by this strange gesture. But I understood, accepted the offering, thanked her, and said, “Shalom.” I felt very happy that Vlachs and Jews have certain rituals in common and that those customs are profound expressions of our universal humanity!

The Bronza lamps in the accompanying photograph are proudly on display in our kitchen in Providence, Rhode Island, as a constant and pleasant reminder of our Vlach origin in the Pindus Mountains of Epiros, Greece. They were made in the town of Ianina and are a gift from my father-in-law. This type of lamp used to be found in every home in northern Greece, providing illumination in homes that had not yet been electrified. It is a handsome article, with some resemblance to the oil lamp used in ancient times in Greece and the Balkans.

Although the Vlachs in the past synchronized their lives with the sun and did most of their work during daylight hours, there were several occasions when the precious lamps would be lit. One such occasion was while the young women of the household were preparing their trousseaus; that meant making a great number of woven goods for the new household, including towels, napkins, sheets, and so on — enough to furnish a house for a lifetime. And how were they rewarded for this arduous task? If they were lucky, they might end up with a young, handsome gioni (young man). But there was always a strong possibility, through a marriage made by proxy, that the beautiful young maiden could find herself married to a man old enough to be her father, living in a household controlled by a, shall we say, “difficult” mother-in-law.

The lamps were among the finest articles in any Vlach household, and they were kept well-polished. The glass chimneys had to be handled with special care as they were very fragile and expensive and often difficult to obtain. 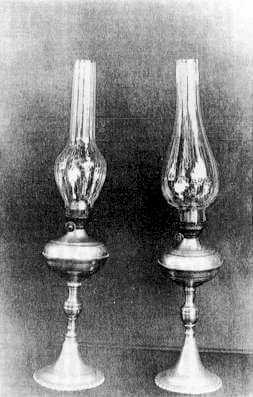 Parents in my home village of Baieasa (known in Greek as Vovousa) tried to supplement their children’s meager education and general world knowledge by narrating fables that conveyed morals. My own father had a rich storehouse of amusing and instructive fables. I later discovered that some of these stories were the Vlach versions of Aesop’s fables. These anecdotes would be repeated endlessly, but we were too polite to tell our father that we had already heard the story so many times.

One of his favorites was about a partnership between a lion, a donkey, and a fox. They agreed to do their hunting in a team and at the end of the day, place all the game in a pile and each take an equal share. At the end of the first day, all the game was placed in a pile. The lion then asked the donkey to divide. The donkey, in keeping with their agreement, divided the prey exactly in thirds, giving each partner his share. The lion was not pleased with such equality — he killed the donkey and placed his carcass on the pile. He then asked the fox to divide up the food. The wise fox took only a small animal for himself and gave the rest to the lion. The lion, very pleased, asked the fox who had taught him to divide so well. “The dead donkey,” replied the fox. [Editor’s Note: This is one of Aesop’s fables.]

Death and the Old Man

As my father grew older, there was one fable that he told more frequently: Charon (the Grim Reaper — death personified) comes to an old man and tells him that the final hour has arrived. The old man, trying to gain additional days of life, accuses Death of being unfair by not having given the old man sufficient warning of its coming. Death replies, “What do you mean, I haven’t given you warning of my coming? Didn’t I take away your hair, then your teeth, your eyesight, and your hearing? I gave you plenty of warning — now come with me!”

PrevPreviousThe Macedonian Romanians of St. Louis
NextDid You Know What Other People Have to Say about Us?Next