Portrait of a Family in Baieasa, 1912 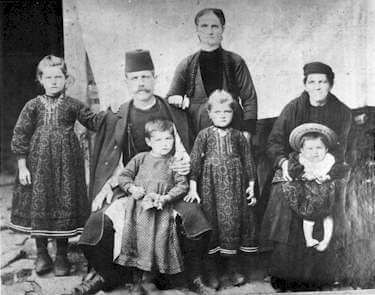 This excellent portrait of a family group was taken by an unknown Vlach photographer in Baieasa, Greece, in 1912, when the science of photography was in its infancy. The large and clumsy camera was mounted on a tripod, and glass plates were used instead of film. To focus the camera, the photographer covered his head with a black cloth, and this strange procedure added a sense of mystery to the art of picture-taking. No attempt was made by the photographer to have the people smile. It was all very serious business. In order to hold the children’s attention, the photographer told them that if they kept their eyes on the lens of the camera, a little bird would fly out.

As we look at the portrait, we see that the mood of the family is somber, even grave. Note also the seating arrangement. In typical Vlach tradition, the mother stands behind her afendi, her “lord.” They are attired in very plain, homespun clothes, with the grandmother dressed entirely in black, in constant mourning, and both women wearing kerchiefs. The brother and the baby are both wearing skirts. The mother made the clothes, and it was easier and cheaper to make a simple skirt than to make trousers. The two girls do not appear to be very happy; the younger one may even be angry. Prior to posing for the picture, the two girls quarreled over who was to wear the better gold necklace.

We know that the piucture was taken in the summer — late summer — because the bigger boy is holding a pumpkin blossom in his left hand. The pumpkin blossom was probably the photographer’s way of enhancing the portrait. But after the shutter had clicked and the sitting was over, a bee emerged from the blossom and stung the boy. Such was photography in Baieasa in 1912.

The afendi wears his Turkish fez proudly and sternly. The fez, a red, cylindrical hat — trademark of a Turk — gave the wearer added height and a certain dignity. Turkish soldiers wearing the fez in battle were much feared. Vlach men, like the gentleman in the portrait, adopted the fez, together with other customs of the Ottomans, who remained in our village until 1912, the year the castru (castle) in Ianina fell. The same year, a large battle fought in Baieasa resulted in victory for the Greeks. During the battle, the inhabitants of Baieasa fled to the mountains for safety and the baby in the picture was slightly wounded while being carried on his mother’s back. General Fez, who commanded the Turkish forces, was killed in this battle — a hill in the village bears his name today. Our long association with the Ottomans is reflected in our language, our customs and our traditions. Though there was high respect for womankind, there was also strict separation of the sexes, and recognition of the father as the ultimate authority in the family; these things were reinforced by the Turkish influence on our culture.

Many of our anecdotes and stories bear the stamp of the Turks. One story that was often heard in the past (and is very much alive and popular even today, thanks in part to the fact that Nicu Batzaria wrote it down) is that of a stubborn, strong-willed wife who held her ground in disputes with her husband. One day they were sitting at a riverbank, admiring the adjacent field. The grass was about ready to be cut, and the husband remarked that any time now, someone would come along with a scythe. The wife was astonished — she asserted that the proper tool for cutting the grass would be shears. She held her ground in the ensuing argument, but her stubbornness so irritated her husband that in a fit of rage he threw her in the river to drown. Her husband cried out to her and gave her a last chance to change her mind by offering to rescue her if she would only admit that grass was cut with a scythe. As the swift currents of the river swept her away and pulled her down, she put up her hand and with two fingers made the motion of the blades of the shears cutting grass — she would rather die than give in to her husband! This rebel against the tyranny of husbands may have been the first feminist. She has since been followed by many others.

During our eight years in Spain, I was surprised to hear the same story. I was pleased that our customs had so much in common with those of the Spaniards. But this sort of thing happens often in the Balkans and North Africa, whose peoples have been linked by the Mediterranean for many millenia. When you travel in this area, you realize that Vlach customs are similar to those of a vast number of people in many countries.

The food of the Mediterranean basin is also quite similar. If you can’t read a menu because it is in Turkish or Arabic, you can always ask for pilaf and be certain that you will be served a tasty, familiar dish. Then there is the deliciouys lukum and halvah and baklava. Women’s dress is another common denominator; I found striking resemblances between the traditional attire of Moroccan women and Vlach women. Notice the gold necklaces on the girls in the photograph. Nearly all the women in North Africa wear such necklaces — even poor women. All these common denominators only increased my pride in being a member of a extraordinary, mysterious group of people living in the twilight of their language and culture, about to be absorbed and to disappear from the face of the earth.

But let us return to the portrait of the family in Baieasa in 1912. The baby wearing the straw hat in the picture is me; the standing woman is my dear mother. Absent are our eldest sister and brother, Viola and Andrew, who were far away, employed in a shoe factory in Haverhill, Massachusetts. The older girl in the photo is our sister Marion and the boy is Peter. The girl next to me is Lucia Perkins, who now lives in Concord, New Hampshire. She and I are the only survivors, and we treasure this precious portrait.