We planned this issue of our Newsletter as a scholars’ forum on the Aromanian language. Though we’ve carried articles by scholars before, we haven’t had an issue solely dedicated to their work. We are delighted to be able to present articles by two well-known and highly respected scholars: Kostas Kazazis and Victor Friedman of the University of Chicago.

And when we came across Miranda Vickers’s fascinating piece about the Vlachs in The European Magazine, we couldn’t help but include that as well.

The result, we hope you will agree, is an issue that not only offers insight and information about our language and culture — it also shows that we continue to be the subject of keen interest among some very bright thinkers.

In other good news: The Society held its 93rd Anniversary Dinner-Dance on September 1, 1996 in Bridgeport, Connecticut. It was a well-attended and enjoyable event, thanks in no small part to the outstanding music of Odyssey, featuring George Stathos on clarinet. We are already planning our 95th — look for details in the Newsletter next year.

The Society presented its Distinguished Service Award to Tiberius Cunia, a professor at the State University of New York who put aside his career in 1991 in order to publish books in Aromanian and send them, usually free of charge, to our people in Greece, Albania, Macedonia, and Romania. Many of us talk about preserving our language and culture; Prof. Cunia has not been content merely to talk, and has so far spent some $50,000 of his own money on this project, printing and shipping 30 different books. The Society announced that it will be supporting Prof. Cunia’s latest project, an Aromanian-English version of a novel first published by the Aromanian intellectual Marcu Beza during the 1920s.

Not all the news is good, unfortunately. The problems in Albania continue.

First, there is the painful news of the desecration of almost two dozen frescoes and icons in the decaying churches of Voskopoja. We hope you’ll take the time to write Albanian President Dr. Sali Berisha about your concern for these priceless monuments of Aromanian culture, faith, and history.

Second, the construction of a new church for our community in Korçë continues to be plagued by delays, theft of materials, disorganization, and infighting within the community. An act of God destroyed the previous structure; we hope it doesn’t take an act of God to build it up again.

Nor is infighting limited to the new building for the church. New governing councils were elected recently for the Albanian Vlach Society and the local group in Korçë. But apparently, the man elected President in Korçë was unacceptable to the Romanian Ambassador to Albania, George Micu, who has made a hobby of pulling strings in our community. Sources tell us Micu compelled the priest Taki Verriga to split from the main Korçë group and form a new one headed by Nick Pippa. Mr. Pippa himself apprently fell out of favor within two months and was replaced with a non-Aromanian speaker named Cochiu Prifteni, who then went off to Romania.

And there the situation stands. What was it Santayana said — that those who forget history are doomed to repeat it?

• The Internet is an extraordinary resource for seekers of unusual information. We found a site on the World Wide Web the other day that offers incredibly detailed maps of regions throughout the world, including Macedonia. It actually featured the Vlach village of Avdhella in Greece, so small that it rarely makes it onto maps. Visit the site (http://www.mapquest.com) and look for your own favorite small village.

• Metsovo now has its own site on the Web. Though it is has a strong pro-Hellenic slant, it is worth visiting, especially if you are contemplating a trip to this Vlach town. Check out http://daphne.cc.uoi.gr/metsovo/.

• An article in the New York Times on September 23rd told of the decline of family reunions in Appalachia. Speaking of the way children of area residents have scattered throughout the U.S., one person said, “The reality is that the youngsters aren’t Appalachians. They are Chicagoans or Detroiters or Cincinnatians.” Another countered with, “You can take us out of the mountains, but you can’t take the mountains out of us.” Amen — to both views…

• The opposite process is taking place in Mongolia, according to an October 9th article in the same paper. As work in the cities and towns disappears as a result of the collapse of communism, people are returning to the countryside to take up the nomadic lifestyle of their ancestors. “Mongolia is one of the few developing countries where more people are moving from city to country than in the other direction.”

• An article in the Wall Street Journal on April 26th illustrated the absurdities to which nationalism so easily lends itself. Newly independent Slovakia is hunting around for “national heroes.” Once upon a time, when it was united with what is now the Czech Republic to form Czechoslovakia, it had many such heroes, from tennis star Martina Navratilova to composer Antonin Dvorak. But now the pickings are slim: “Although there are some seven million Slovaks world-wide,” writes reporter Greg Steinmetz, “they have been lumped in with other groups for most of their history.” Andy Warhol is a candidate, but he wasn’t Slovak; according to his brother, John Warhola, “We just said we were Slovak because no one had ever heard of Carpatho-Rusyns.”

• Hebrew was essentially unspoken for 1,700 years, until it was revived as the official language of Israel. But how does one bring such an antique language into the modern world of toaster ovens and VCRs? The Israeli Parliament has given the Academy of the Hebrew Language the job of keeping the language up-to-date. The Academy consists of 45 distinguished writers and linguists who meet a half-dozen times a year to discuss linguistic issues and create new words as needed.

• On January 8th of this year, Red Thunder Cloud — a singer, dancer, and storyteller — passed away in Worcester, Mass. He was the last known speaker of the language of the Catawba Indians. “It’s always sad when the last living speaker of a language dies,” said Prof. Carl Teeter of Harvard University.

• Serbs, Croatians, and Bosnian Muslims once spoke a common language, Serbo-Croatian. The key difference was that the Serbs wrote it using the Cyrillic alphabet, and the Croatians and Bosnians wrote in a Latin alphabet. But now that the three ethnic groups have separated their countries so violently, they are intent on going their own separate ways linguistically as well. The Bosnians are introducing Arabic words, while the Croats are dusting off words used in medieval Croatia — all to differentiate themselves from the Serbs, who once dominated the other two groups. 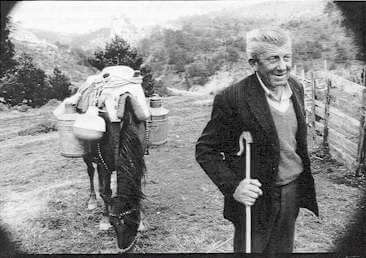