It’s been almost 3 years since the euphoric discovery that the Aromanian community in Albania had somehow survived communism and was organizing to preserve itself. At the time, scholars were estimating our population in the Balkans at around 50,000 and declining fast; here was a forgotten pocket of Vlachs claiming to be some 250,000 strong! I well remember the awe felt by all outsiders who attended the first international conference of the Albanian Vlachs in April of 1992; we were shocked at the size of our community there, swept away by its enthusiasm, and amazed at its solidarity.

The situation is very different 3 years later. Far from being the launching pad for an international Aromanian revival, our community in Albania today stands distraught and deeply divided, thanks to the same factors that have made group preservation so elusive for all Vlachs over the past two centuries: a lethal combination of politics and pride.

In an earlier issue of this Newsletter, I warned of the political threat to our community in Albania, where the old Greek versus Romanian contest for our souls had already begun to emerge from a half-century of dormancy under Albanian communism. In essence, we are speaking of a bidding war in which Greeks and Romanians offered scholarships, jobs, churches, schools, and money to Vlachs who sided with them. Anyone even remotely familiar with the economic and cultural resources of both countries knows that the outcome was never in doubt; Greece has far more attractions for the impoverished Albanian Vlachs — jobs and opportunities, not to mention a chance to claim descent not from rough mountaineers but from Socrates, Plato, and other paragons of a culture that is almost universally admired in the West. In other words, no contest.

A brief story will illustrate what has happened: When I visited Albania in 1992, one of the most vociferous young leaders of the new Vlach association befriended me and spent much time with me. His name doesn’t matter; what matters is that he kept saying to me (and to anyone else who would listen), “The Romanians are our brothers. We are the same people. They will help us. We must stand with them.” And so on. I told him my view that the Vlachs were neither Romanian nor Greek but a distinct ethnic group, but he would not hear it: “We are Romanians, they are Romanians, that’s all there is to it,” he said, in the gruff and peremptory way males in our culture are trained to make such pronouncements. Having learned (rather late in life, being a bit thick myself) that it was futile to try to change the mind of any Vlach with a strong opinion, I gave up.

Two and a half years later, I opened up a Greek newspaper in New York and noticed that an article about the Greek minority in Albania also mentioned the Vlachs. Upon closer examination, I read a quote from the very same fellow, his name now hellenized with an “s” at the end, who said, “The Vlachs are Greeks, they are the oldest and truest Greeks, but we have wandered away from our true culture. We want to rejoin our hellenic brothers.” And so on.

The French mystic poet Charles Peguy, one of many who fell in the butchery of the First World War, wrote that “All things begin in mystery and end in politics.” This story could easily be cited as proof.

Readers of this Newsletter already know that Ianko Balamaci was deposed as President of the Aromanian Society more than a year ago because he was felt to have spent too much of the community’s money on trips to Romania and was perceived as being in the pocket of the Romanian Ambassador to Albania, who has made it his special hobby to reclaim the Albanian Vlachs as long-lost kin. The other person clearly representing the Romanian view is a Vlach priest, a very nice fellow named Taki Veriga; he was trained by the Romanians and sent back to lead the Korçë community in worship. But some in the community now discredit his efforts on behalf of the Romanians because of the funding he’s received from them; these people are leaving the small Aromanian congregation the Society Farsarotul has pledged so much money to support and instead worshipping at the Greek Metropolitan church nearby.

On the other hand, the Greek Ambassador to Albania employs people fluent in Vlach who have built strong personal relationships with members of our community. The Greeks distribute largesse, too, and not just to certain chosen individuals — they give to everyone they possibly can. Trips are sponsored to Greece to witness the annual festival of the Pan-Hellenic Union of Vlach Cultural Societies. Visas are given to work in Greece for hard currency. Contacts are made with prosperous Vlachs in Greece (there are many); jobs are offered; alliances formed; and commitments made. The Greeks have tenaciously defended the Orthodox of Albania. Many Korçë Vlachs seem to feel, correctly or incorrectly, that in Greece they have a friend who is interested not in itself but in them.

I favor neither side, and have had the honor of being hated and vilified by both. I only know that the Vlach community in Albania is being torn apart by politics as usual, and now it’s reached our home base in Korçë. I cannot help but think of Noel Malcolm’s devastating statement about the centuries of struggle along the border between the Ottoman and Habsburg Empires, both of which used Vlachs as mercenaries: “Apart from the big set-piece campaigns,” he writes, “the military struggle between Ottoman and Habsburg on this border consisted mainly, year in, year out, of Vlachs fighting Vlachs.”

Once upon a time, the tribe sustained the individual, and strict rules, absolute certainties, and unquestioned authority sustained the tribe. But what worked well in the Balkan mountains of the 16th century can be a recipe for disaster in the modern nations of the 21st.

We seem to be learning that the hard way. 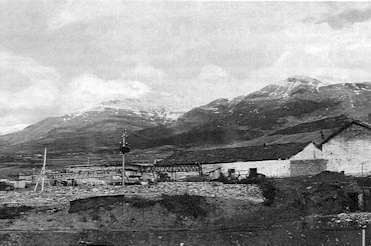 The northern flank of Mt. Grammos, in Albania: to the south lies Greece.