As an example of how this might be done we can take three fairly well-known Aromanian folk-songs from three different times and places and try to locate them within their contexts.

For perhaps several hundred years, the nomadic Farsharotsi from the area of Pleasa-Korche-Dishnitsa had migrated to winter pastures in Thessaly, especially around Almyros, Volos, and Tyrnavos. This worked out as long as both areas were within the Ottoman Empire; in 1881, however, Thessaly was ceded to Greece by the Turks, despite serious protests by Aromanians from all parts. The new Turco-Greek border hampered the freedom of these people to migrate, and some of them decided to settle year-round in Thessaly and began to take Greek wives. Thus, this song can probably be dated to this period, about 1881.

2. A Song from Verria

This song obviously dates from the massive migration to the United States starting just after the turn of this century. The Ottomans’ Balkan lands were in turmoil then, the years 1897-1918 witnessing almost continuous anarchy and war (both undeclared and declared). Economic, social, and political prospects seemed bleak to many, and some decided that the trauma of emigration to America was worth the chance it gave them to move into a better situation. Thousands of Aromanians came over, usually settling in the factory towns and cities of the Northeast (Bridgeport, Woonsocket, Worcester, New York) and Midwest (Detroit, St. Louis). The Society Farsarotul was founded in 1903 by Nicola Cican largely in order to help these people make the often painful transition to a completely new world. This song most likely dates from the period of heaviest emigration, 1900-1920. 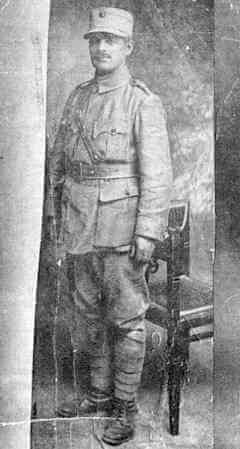 A rare photo of the founder of the Society Farsarotul,
taken shortly before his death in World War I.

The Italians attacked Greece in October of 1940, and despite the fact that the invaders outnumbered the Greeks in men and weapons, the Greek army heroically pushed them back into Albania by November, humiliating the Axis Powers and inspiring the rest of the world in those dark hours. Hitler was forced to invade Greece with German troops and aircraft in April of 1941 in order to salvage the operation. The Germans were particularly fond of the tactic of burning mountain villages, which obviously hit our mountain-based population particularly hard. Many of these villages did not recover until the 1970s; fortunately, the shepherds kept returning to them and gradually more and more people went along–the mountains seem to hold a strong attraction for us. This particular song provides its own date; this is rare.

We might make one further observation: Songs seem to be (amongst many other things) one way of dealing with or responding to stressful or threatening situations. All three songs reflect aperceived threat to a village, a cultural group, or even a way of life, but nevertheless, each song carries with it also a small victory: People survived to tell the tale. As long as we hear new songs, then, even if they record a threat to the old way of life, the culture continues; it is only when those songs stop coming that the culture truly faces its demise.