We are pleased to welcome the following new members:

An interesting article “In search of my other Greek roots” appeared in the September/October 2006 issue of Odyssey, a leading Greek magazine written in English.  Writer Elena Polyzos was raised in a trilingual (Greek-Vlach-English) family in Sydney, Australia, that originally hailed from Kastania in modern-day Greece.  Hers was the only Vlach family in their local Greek-Australian community and she was filled with questions about the Vlachs that none in her community were able to answer.  She did research on her own and came up with some answers that worked for her; unfortunately, her research seems to have stayed firmly within the boundaries of Greek identity (e.g., she concludes that the Vlachs are simply Greeks who were Latinized, and she even translates her village’s name as “Greek for ‘chestnut tree’” when the root of “Kastania” is actually Latin, castanea, “chestnut tree or chestnut”).  She visited her ancestral village as a child and eventually took up residence in Athens.

With the help of a grant from the U.S. Agency for International Development (USAID), Macedonia has become one of the world’s first wireless countries – for some $18 a month, almost all of the 2 million residents of this mountainous republic now have access to a Wi-Fi network spanning 30 cities and more than 1,000 square miles.

The Vlach village of Neveska – today known as Nymphaion, Greece – is being reborn as a tourist attraction.  Once numbering 3000 souls, by 1990 only 35 residents remained, but today the village and its environs have been transformed by local residents in partnership with the Greek Culture Ministry and the European Union into a “living museum of national heritage and unspoiled nature,” featuring a conference center, museum, outdoor theater, equestrian stables, municipal guest houses, a library, photo exhibits, a nature park, hostels, restaurants, and cafes.  Sounds like a nice destination for Vlachs visiting from the US, among many others…

The Nazis left Greece in 1944 but Richard Clogg, the well-known author of A Short History of Modern Greece and Emeritus Fellow of Saint Antony’s College, Oxford, recently discovered documents that discuss a Nazi plan to create instability in Greece in 1945 by parachuting in 14 Greek-speaking Vlachs from Romania.  Soon after the 14 were dropped into the Peloponnese, the plan fell apart as their supplies were lost and several of them were discovered and arrested.  Clogg’s research is available on the Internet.

The main article in our last issue, Thede Kahl’s “Aromanians in Greece: Minority or Vlach-Speaking Greeks?” was roundly criticized in a letter written by the Panhellenic Federation of Vlach Cultural Associations and sent to the Society Farsarotul, among others.  Given the unfortunate title, “Vlachs in Greece: When the Guinea Pigs Judge the Scientist,” the letter runs a full 7 pages and alternates Greek nationalist bromides and ad hominem attacks with the occasional insightful truth and combines them all into a convoluted ultra-Balkan anti-Kahl tract.  They could have said more – and more effectively – in a simple half-page letter.  But sadly, like the genre of Balkan polemics to which this letter belongs, it seems to have been written more to produce satisfaction in the writer than enlightenment in the reader.

Speaking of Thede Kahl, he just co-authored (in German) a book entitled, “The Aromanian Spoken in Turia/Krania (Greece),” available for 45 Euro from a distributor in Germany.  For more information, email verlag@kubon-sagner.de.

Another Congress of Vlach Culture was held in Bridgeport, Connecticut, USA, in July 2005.  As usual, the Congress ended with a resolution primarily aimed at Greece calling upon the Balkan states to support education and religious services as well as mass media programs in Vlach.

The Vlachs of the Republic of Macedonia have their own magazine, “Grailu Armanescu,” edited by the well-known poet Dina Cuvata.  The April 2006 issue features an interesting and lengthy letter from Veronica Liuba, the daughter of Vasile Mushi, a Farsharot Vlach from Pleassa, Albania, recounting her father’s incredible journey from Pleassa to Romania, where he became a lawyer and poet and activist for the Aromanians of the Balkans, to Italy, where he worked as a journalist during the Second World War, and then to the United States, settling in Rhode Island, Connecticut, and then finally New York.  Highly recommended reading.

If you are looking for a large group of Vlachs asking their government for linguistic and other rights, look no further than Romania.  A fascinating May 30, 2006, article in the Bucharest Daily News documents a large Aromanian cultural celebration attended by some 3,000 people in Bucharest.  The President of the Community of Aromanians in Romania, Costica Canacheu, who is also a Democratic Deputy in the Romanian Parliament, called for recognition of the Aromanians as a national minority in Romania, and demanded the right to learn and pray in their own language rather than Romanian.  “When we call for the recognition of our right to use our mother tongue we are told that we do not have a mother language, but a dialect,” said a manifesto that was read aloud at the festival.

Of course, not all Vlachs in Romania would agree with that manifesto.  There is a sizable group that holds the opposite position – that the Vlachs in Romania could not possibly be a minority for the simple reason that they ARE Romanian.  One of the leading spokesmen for that point of view, a Dr. Stoica Lascu of Ovidius University in Constantsa, wrote an article a few years back for a major Romanian periodical entitled, “Aromanians – neither ‘tsintsars’ nor ‘macedonians’ nor ‘neighbors’ but rather just Balkan Romanians.”

We had the pleasure of leafing through “Armanamea,” a high-quality glossy magazine aimed at the Vlachs of Romania.  We saw an ad for an excursion to some of the major Vlach regions of Greece, culminating in a visit to Metsovo (Aminju, in Aromanian).  There were poems… there were historical pieces… there were book reviews… there were opinion pieces… and there were attractive photographs throughout.  Most encouraging of all was the significant focus on the next generation – there were many articles by and about younger people, including an article asking why Vlach youths in Romania don’t speak  their language.  The magazine also featured a report from the Vlachs of Constantsa, an article about television broadcasts in Aromanian, and an interview with a popular Aromanian actress in Romania, Dana Pocea, that asks, among other things, what her Aromanian ethnicity means to her and how it relates to her life and career.

Did you know that one of the candidates in the Romanian presidential election of 2004 was a Vlach named Gigi Becali?  According to an article in Radio Free Europe/Radio Liberty, Becali is a former shepherd who lacks a formal education but made a fortune estimated at $200 million under mysterious circumstances after the fall of the communist regime.  He took over the New Generation Party and started to employ the rhetoric of the long-defunct Romanian fascist group, the Iron Guard, using Guardist slogans such as “Everything for the Country” and promising to make Romania “like the holy sun in the sky.” Becali said he would help any religious organization except Jews and on Romanian television called for the canonization of  Corneliu Zelea Codreanu, leader of the Iron Guard.  Becali won a mere 1.7% of the vote.

Mark Mazower, in his landmark “Salonica, City of Ghosts: Christians, Muslims and Jews 1430-1950,” discusses the sizable Vlach presence in that great port city. Among other things, he writes, “So many Vlachs settled in Salonica that in 1880 a Romanian paper claimed, to the fury of the Greek community, that there were no genuine Greeks there at all.”

A huge archaeological  project is underway in Butrint, Albania, where 2,000 years ago Julius Caesar created a colony for Roman veterans.  A Washington Post article described it as “ a multinational force of archaeologists in what is perhaps the largest ongoing dig in the Mediterranean,” involving 100 archaeologists from 19 nations, including of course Albania.  By the 5th century A.D., the population is thought to have reached 20,000 people; since its decline took place almost a millennium later, after the 14th century, it is thought that its excavation could shed significant light on the medieval history of the Balkans. 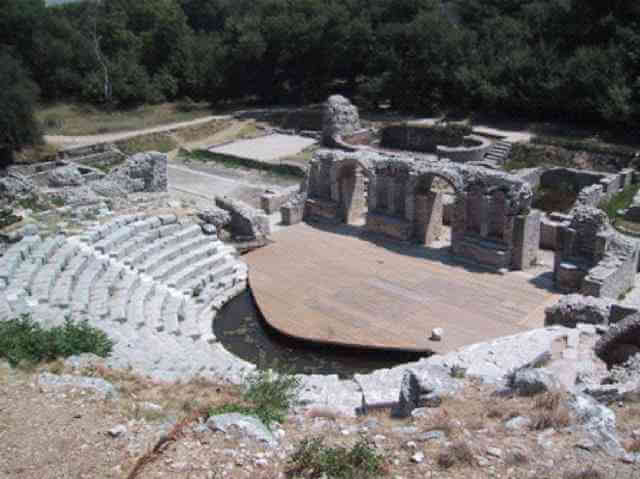 PrevPreviousVlach Women and Modernization: A Footnote to Progress
NextAn Istrian in New YorkNext

An Istrian in New York

Vlach Women and Modernization: A Footnote to Progress