The Society notes with sadness the passing of long-time members Grigore Becea and Santa Gecca. May their souls rest in peace.

We welcome with great pleasure the following new members:

One of the leading English-language newspapers of the Greek community in America, The Greek American, recently featured an illustrated four-part series on our people entitled “Aromanians: One View from the Diaspora.” It was written by our own editor, Nick Balamaci, and the response from the Greek community was “overwhelming–and overwhelmingly positive.” The Society is considering reprinting the series as a special issue of its Newsletter; in the meantime, a limited number of photocopies are available. Write us if you’d like a copy.

In the last issue, we published information on how to obtain five key books concerning the Aromanians, and we mentioned that we would try to obtain the same kind of information for some records and tapes of our music, too. While that information is not ready yet, the other day we discovered that a new album of our songs is generally available in record stores in the U.S.A. The name of the album is Rumania: Vocal Polyphony of the Aromanians, and it was found in the international music section of both of the Tower Record stores in New York City. The album was issued by the French National Center of Scientific Research, and the recordings were made in several villages in Eastern Rumania which were settled in the twentieth century with Aromanians who had emigrated there from their homeland in Macedonia, Epirus, Thessaly, and Thrace. As the title indicates, the music is vocal (save a few pieces on the bagpipe), and it is authentic, having been recorded mainly at weddings. Two styles of polyphony are demonstrated, that of the Farsharotsi (from southern Albania and northern Greece) and that of the Gramushteani (from southern Yugoslavia and northern Greece). The album comes complete with detailed descriptive notes, most of which are clear enough to be understood by newcomers to the subject. Photographs are included. We are looking into obtaining a stock of this record, but in the meantime, pick up a copy in your local record store or, if all else fails, in Tower Records. For those not familiar with vocal polyphonic singing, this music takes some getting used to; for the rest–who perhaps recall our own old-timers here in America when they used to take off their jackets, loosen their neckties, and with drink in hand get down to some serious singing–this record will revive memories grown misty and yet still sweet.

A correction to our last issue: The term Choban (“shepherd”) is Turkish, not Albanian. Thanks to Mary Seferi for pointing this out.

The Society has approved a $1500. grant to be awarded to a qualified scholar by an accredited American academic institution in order to research the status of the film records left by the Manakia brothers, Aromanians from Avdhella who were the first Balkan cinematographers. Between 1905 and 1922, they apparently took much footage of the Balkans and especially of our villages and way of life, one which has now largely disappeared. This film therefore represents a unique resource, and we aim to see that it is not only preserved properly but also widely distributed. Most of the film and photographs are located in museums and archives in Skopje and Bituli, Yugoslavia. The first step is to obtain an accurate inventory of these holdings; we hope to have some results within a year’s time.

DANCE CLASSES: Line dance classes are scheduled for two Fridays, April 29 and May 20, 1988, from 6:30 to 8:30 PM in the Tonna Center of the Saint Dimitrie Church in Bridgeport; refreshments will be provided. Members and their friends and families are welcome, including children of age 5 and up. Wear sneakers and be prepared for a good workout! Contact Bob Nicola at (203) 334-4153 (daytime) for more information or to volunteer.

Treasurer and long-time pillar
of the Society, Bob Nicola.

THE PERFECT PITA: Ethnic food preparation classes are scheduled to begin on April 27, 1988, from 6:30 to 8:30 PM, also in the Tonna Center; there will be recipes and demonstrations to help you cook your favorite dishes. Contact Bill Balamaci at (203) 576-0757 (daytime) for more information or to volunteer.

CULTURAL AWARENESS DAY: See colorful slides taken in the Pindus Mountains at the first annual festival of the Panhellenic Vlach Cultural Society in 1984. Hear Nicholas Balamaci and George Moran speak about “Recent Developments in Vlach Cultural Awareness.” A question-and-answer period will follow. The presentation will take place on Sunday, May 22, 1988, at 7 PM in the Tonna Center; refreshments will be served. Contact Nicholas Balamaci at (718) 728-8288 for more information.

We are also considering classes to teach the Aromanian language; if you are interested or haveany questions or ideas about this, please drop a line to George Moran in care of the SocietyFarsarotul at our P.O. Box.

IMPORTANT NEWS!! A SPECIAL DANCE TO CELEBRATE OUR 85th
ANNIVERSARY HAS BEEN SCHEDULED AND THE FIRST DETAILS ARE NOW
AVAILABLE — GET YOUR CALENDARS READY AND SAVE THIS DATE:
Saturday, October 15, 1988, at 7 PM at the Hillandale Country Club in Trumbull, Conn. In addition to dinner and bar service, there will be dancing to live Balkan and American music. Ticket prices: $35. per adult, $17. per student. Reservations required. ALL ARE INVITED — you don’t have to be a member to come. We will be honoring our Senior Citizen Matured Members on this important occasion; the event will be videotaped and photographed. For additional information and reservations, please write to: The Society Farsarotul, P.O. Box 1660, Bridgeport, Connecticut, 06601. 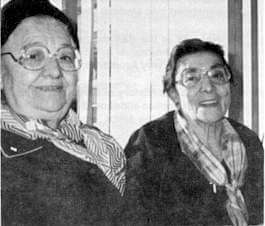 Can anyone identify these two women who
smiled so sweetly at our last General Meeting?

We have a limited supply of our last issue (Volume I, Issue 2; July 1987); those who would like a back copy should drop a line to the Editor, while the supply lasts. We would be happy to send acopy to prospective members, too — just send us their names and addresses. 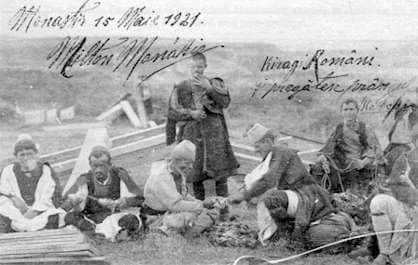