The Society mourns the passing of several pillars of our community and extends its deepest sympathies to their families:

—Modi Bici of Fairfield, Conn., a longtime member of the Society Farsarotul;
—Aspasia Stambelu of New York, NY, another anchor of our community;
—Fanica Colimitra of Bridgeport, Conn., a relative of our President, Andrei Colimitra;
—Sophie Cashavelly of Bradenton, FL, a longtime Society member;
–Nick Nicola of Fairfield, Conn., father of our Treasurer, Robert Nicola;
—Vasilichia Teja of Bridgeport, Conn., the mother of Board Member Dennis Balamaci.

On September 1, 1997, Prof. Stephanie Schwandner-Sievers was appointed the first Alex Nash Fellow for Albanian Studies at the University of London, England. Ms. Schwandner-Sievers has been conducting research in Albania since 1994 on Vlach ethnicity and identity politics in the re-emerging Balkan nation. She can be reached in care of the University’s School of Slavonic and East European Studies, Senate House, Malet Street, London, WC1E 7HU, United Kingdom.

We all know of several efforts internationally to preserve Aromanian culture. Occasionally, however, traces of our culture are preserved inadvertently… Such is the case with “Amarantos,” a 20-minute videotape by Alexandra Anthony & Mary Vouras about a Vlach village by the same name in Greece. It illustrates how the villagers, who are today spread far and wide throughout Greece, all come together to celebrate the key feast day in their native village once a year. Definitely worth seeing, and available from Greek Celebrations, 53 Boyd Street, Watertownm MA 02172.

The World Wide Web continues to offer a relative torrent of information about the Vlachs; however, like everything else on the Web, the quality of the information is very uneven. A sampling follows:

? http://www.greekhelsinki.gr/english/ reports/vlachs.html — Report of the Greek Helsinki Human Rights Commission regarding the treatment of the Vlachs in Greece; very informative.

? http://www.unet.com.mk/manaki97/ manaki_e.htm#top — a Macedonian site that tells the history of the Manaki brothers without running away from or trying to hide their Vlach origins. A few nice photographs here, too.

? http://www.flokati.com — a site run by Hellenic Rug Imports in Brooklyn, offering authentic Vlach rugs known alternatively as flokati and vilendzi; claims that “the 5th century Vlachs, who lived in Samarina… were the inventors of the Flokati Rug.” Highly unlikely, especially since Samarina has only been settled for a few centuries.

? http://www.dejanews.com — Deja News has a newsgroup, soc.culture. romanian and related message groups that, soon after the death of Mother Teresa, began to assert that she was in fact Aromanian, the daughter of a family in the wool-dying business in Skopje, Macedonia. There are several reasons why this is unlikely: She acknowledged Albanian ancestry, not Aromanian, and she was Catholic, while Aromanians are almost uniformly Orthodox Christians. Some people point to her family name, Boiagiu or Boiangiu, as common among Aromanians in Bituli and Skopje, where she was born — but the name means “painter” in Turkish, a profession that included many peoples besides Aromanians.

Of the 3 Greek bishops assigned to Albania by the Holy Synod of the Ecumenical Patriarchate in Istanbul (Constantinople) in 1992, Ignatius speaks Albanian, Christodoulos speaks Vlach (Aromanian), and Alexander speaks Greek.

The Hellenic-American Cultural Association of Colorado recently sponsored a lecture by Mrs. Maria Vasiliou on “The Vlachs of Greece.” The lecture was scheduled to take place In March at the Assumption Greek Orthodox Cathedral in Denver; we’d love to hear from anyone who may have attended.

While many countries are rightly concerned with protecting their mother tongue from the onslaught of English terminology and slang, there is the danger of taking things too far.

In an effort a few years ago to halt the invasion of English words, the French government proposed a law that would ban foreign words from most business and Government communications, radio and television broadcasts, public announcements, and advertising messages whenever a “suitable local equivalent” exists in French.

In 1994, the Delegation for the French Language published a dictionary of French terms as possible substitutes for English words. For example, an airbag could become coussin gonflable de protection and popcorn would be rendered as maïs soufflé.

A similar effort is underway in North America, according to The Washington Post. A 1996 article entitled “Quebec ‘Language Police’ to Resume Enforced Use of French” reports on that Canadian province’s efforts to resume strict enforcement of language laws in French majority areas by “resurrecting the Commission to Protect the French Language.”

“This enforcement agency, disbanded three years ago, was commonly know as the language police or “tongue troopers”–among many in the English-speaking and immigrant communities, which resented linguistic repression.”

One person defended the protective measures by pointing out the fears of some Americans concerning the growth of Spanish in the U.S., “despite a 280 million Anglophone majority in North America.” But on the whole the French language police proved unpopular and was ridiculed by the majority of Quebec’s citizens.

In June 1997, the National Yiddish Book Center opened in Amherst, Mass. It was founded by Aaron Lansky, who, as a 23-year-old graduate student at McGill University, began what he thought would be a two-year project to save Yiddish language books from the trash heap as an old Yiddish-speaking immigrant generation died off. The Center has a staff of 32 and more than 30,000 members around the United States. In its 37,000 square feet of space, the Center houses 120,000 books (out of an overall collection of 1.3 million). Some interesting aspects of this huge undertaking: Mr. Lansky, now 43, openly acknowledges that “the day of Yiddish literature is coming to an end,” and that “99 percent of the people who walk in the door won’t be able to read a word of Yiddish.” And yet, the Center has received tremendous support, even beyond the Jewish community.

An article in The New York Times last year told of a woman who asked a great Yiddish scholar whether Yiddish was doomed to disappear. The answer: “Yiddish has magic. It will outwit history.” We’ve noted on several occasions the many parallels between Yiddish and Aromanian; let’s hope that Aromanian has the same kind of magic…

According to a recent Reuters news service story, developmental psychologists have discovered that riddles and jokes can help children improve their reading skills. The discovery was announced at the annual meeting of the British Psychological Society. “Riddles and jokes are focusing on double meanings,” said Dr. Nicola Yuill of the University of Sussex. “You’re sitting back from the text and reflecting on the meaning of the text.”

What does this have to do with the Aromanians? We have a longstanding cultural tradition of telling riddles; indeed, so pervasive is the tradition among Vlachs that a book was published in Greece in 1987 by Giorgios Exarchos (with the support of the Vlach Society of Verria) entitled, “Tsi Iasti? ?? ?_???_” The book features 220 Aromanian riddles; here are a few samples:

? Tsi treatsi pri n’hoara, shi nu li-baga cañili oara? (negura) What passes right through the village without the dogs even noticing it? (fog)

? Tsi kadi pri munti shi nu kadi? (tserlu shi stealili) What falls on the mountains and yet doesn’t fall? (the sky and stars)

? Suntu doi fratsi, si-avina, si avina, shi nu potu sa si-aduna (soarli shi luna) They’re two brothers who chase each other and chase each other but can’t get together (the sun and the moon)

? Oasi nu ari shi oasi frandzi (limba) It has no bones, but it can break bones (the tongue)

Here’s a real-life riddle: He’s the most famous Aromanian around and yet he’s not Aromanian… Longtime Chicago Cubs sportscaster Harry Caray, who passed away in February at the age of 83. He was born Haralambie Carabina of Aromanian parents in St. Louis and was related to many people in our community.

His father left the family not long after his son was born, and then Harry’s mother died, leaving him an orphan at the tender age of 9. He was raised by an aunt, Doxia, but apparently had had some bitter experiences, for as an adult he all but disowned the community. Later in life, he sometimes claimed that his father was Italian, and in fact he was honored by Italian-American organizations. In his autobiography, Holy Cow!, Caray said he had only dim recollections of his childhood, and speculated that his inability to remember those years might be some kind of self-protective mechanism. Although he took on the name Harry

Caray, he never shed the name Carabina, and from time to time a fellow sportscaster would address him as “Mr. Carabina.”

Over the years, every so often a relative would show up at the broadcast booth to say hello to Caray; some of these encounters turned out poorly, with Caray all but brushing the person off, but on other occasions, there would be a recognition and greeting. He was obviously conflicted in his feelings about his family and community.

But the fact remains that, as far as any of us knows, he never identified himself as a member of our community. So how are we to regard Harry Caray? It would be a stretch to call him an Aromanian, though he did embody qualities often identified with our people, including a certain reticence and ambivalence about ethnic identity. The full story of Harry Caray has yet to be told. Whatever that story turns out to be, we extend our condolences to his family. May he rest in peace. 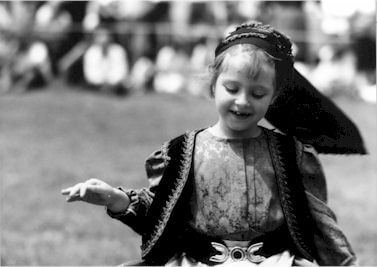 Young Aromanian girl in costume for the Vlach Festival in Greece