The bumbling protagonist of this witty novel is a once-wealthy old Aromanian gentleman and landlord in Belgrade, Arsenie Negovan. It is June 1968; Arsenie is 77 years old and is writing his will. He hasn’t been out of his house in 27 years, and he decides to take a walk so that he may at last see his many beloved buildings again. Unfortunately, his wife and lawyer have been deceiving him for some time, and his buildings have been either bombed out or confiscated by the postwar Yugoslavian Revolution.

The gifted novelist Borislav Pekic, winner of a major Yugoslavian literary prize for his first novel, A Time of Miracles, manages to weave this unlikely scenario into a story that is both musing and sad, using a sort of fast irony to lock the stitches together. For the purposes of this review, however, we will leave the further literary merit of the work to the reader’s judgement and concentrate instead on just a few aspects of the book of interest to us as Aromanians.

In the 17th and 18th centuries, the center of Aromanian culture and commerce (and, interestingly enough, of Greek culture as well) was the town of Moscopolis, located in what is now Albania. It was probably the most prosperous town in the Balkans at the time, and it boasted the only printing press outside of Istanbul. Unfortunately, Moscopolis was sacked by Albanian marauders in 1769 and again in 1788, and, as Wace & Thompson put it, “Finally the harsh rule of Ali Pasha brought about its complete ruin and its inhabitants were dispersed throughout the Balkans.” 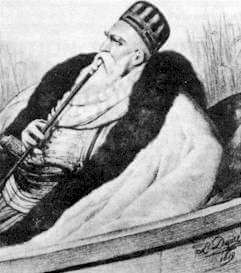 This great dispersion may actually have been a boon for the Balkans, as the cultured and wealthy Moscopolitans joined other Aromanians in providing a viable Christian middle class throughout the Peninsula which stimulated Balkan economic, social, and political development. And for some 200 years, this class has formed a sort of “ruling caste” throughout the Balkans.

How does this tie in with our story? In the 18th century, Belgrade was little more than a fort, a Turkish garrison, a few Serbian peasants, and some Sephardic Jews. The Moscopolis diaspora arrived in Belgrade and helped develop it into a major city. Arsenie’s grandfather, Simeon Nago, once a potter in Moscopolis, became a land speculator who built up Belgrade, and the family has been prominent in Serbian and Yugoslavian politics and commerce ever since.

Now of course this is a novel and the characters and events are not all real–yet it is based on the solid historical reality of our once-dominant position in Balkan commerce and politics. The historical facts are available in the works of Popovich and of Murvar, for example; but for those of us who find simple historical facts too dry or too dull to read, we can gain a valuable perspective through this essentially accurate, wonderfully crafted story by Pekic. We can also learn much about modern Balkan politics and about the ways in which many aspects of our culture (some of them unflattering) have continued to this day.

Although Arsenie’s Moscopolitan origins are not mentioned until page 34 (and thereafter only briefly), one could honestly say that much of the book is about Aromanian culture as reflected in the Negovan and Turjaski families (the latter is Arsenie’s wife Katarina’s family, presumably named after the town of Turia, now called Krania, in Greece). In fact, only once in the book is the families’ ethnic origin explicitly mentioned, and even so it is in a form which most of our people in America would not recognize: Arsenie notes, (p.59) “I was embellished…by that conqueror’s, nomad’s, and traveling merchant’s constancy of purpose which brought my ancestors, still bearing the Graeco-Tsintsarski name of Nago, from the backwoods of Aegean Macedonia…” (The Yugoslavians call us Tsintsari–see the last issue of this Newsletter.)

The Tsintsar ruling caste was finally destroyed and dispossessed by the Yugoslavian Communist Party, a fact that is poignantly referred to in Arsenie’s Will where he charges his heir to remember “in his blackest hour that once before, under the name of Nago, the Negovans lost all their possessions and were scattered to the four corners of the earth; that they started once again from nothing and by their stubbornness and ability again attained the uppermost heights of commercial, social, and political life; that although more than two hundred years have elapsed from that first downward plunge of our breed… we are now once again in a position from which many people have tried to dislodge us.”

Pekic has written a not altogether unsympathetic book about an eccentric member of this ruling caste; indeed, he seems to have the insight into our culture that we would expect only from an insider, from one of us. His Montenegrin origins make it unlikely that he is Aromanian, though he does enter the text of the book at the end as a cousin of Arsenie’s wife Katarina; whatever the actual case is, however, it is enough to note that he has written this enjoyable book with an obvious understanding of some important aspects of our culture.

(I would like to thank Dr. Socrates Asteriou for bringing this book to my attention and for supplying pertinent details of modern Yugoslavian history.)

Until now, the recordings of Aromanian songs coming out of Rumania have been of music carried there by the older generation and largely preserved in its original form, as it was sung in our homeland. This album breaks with that tradition and shows that a new culture has arisen, a fusion of Aromanian and Rumanian elements. The new songs do not stir one the same as the old

ones do, but the album is worth owning at least to keep track of the changes occurring in our diaspora community in Rumania.