A Tree Grows Down Under: The Aroumanian Australians

The emblem of the Australian Aroumanian Society is a tree stump with a healthy, yet fragile new growth springing from one side. And that sums up pretty well how the members consider the state of Aroumanian culture — in fresh and vibrant rebirth.

Officially, the 800-member strong society is only a year and a half old, having been registered in May of 1993. Unofficially, many of the members have conducted social events together since 1990, including traditional dances, concerts and fund-raising activities to help renovate Vlach churches in Yugolsav-Macedonia.

Nicu Sterjou, born in Kihaiei, Macedonia, is president of the Society. He has witnessed and encouraged the growth of awareness amongst Vlachs in Australia over the past few years, few of whom, he readily admits, really knew the history and the transnational extent of their culture and language.

The society has members from all over the Balkans with the notable exception of Greece. Mr. Sterjou explained that this was not intentional, but rather the result of the society having been formed by word of mouth. And there is by no means any thought of exclusion: “We are completely apolitical — our members are also Albanian, (Yugoslav-) Macedonian, Bulgarian, etc., but when we are together, we are Aroumanians.”

Mr. Chris Gatz is a Greek-Vlach from Epirus and a good friend of Mr. Sterjou. Together they actively and enthusiastically discuss the importance of keeping alive Aroumanian culture in Australia and their countries of birth. 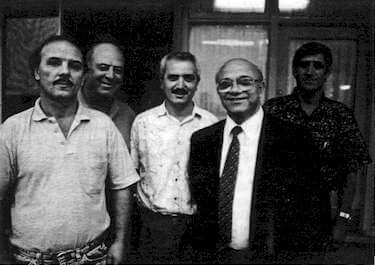 Some key members of the Australian Aroumanian Society 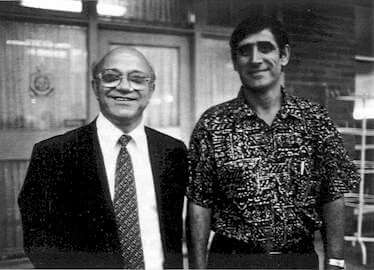 Mr. Gatz acknowledges the difficulty of introducing other fellow Greek-Vlachs to the Australian-Aroumanian Society, while ethnic tensions remain high over the naming of Yugoslav Macedonia: “We must be very careful,” he said, “not to get on the wrong side of the Greek community here–there is a lot of misunderstanding amongst them about what we (the Vlachs) are and how the recognition of our Vlach heritage is nothing anti-Greek.” [Editor’s note: Melbourne has one of the largest Greek diaspora communities in the world, the other being Astoria, Queens, New York.]

A possible solution, he thinks, would be the formation of a Pan-Hellenic Vlach Society in Australia, which would later be amalgamated with the Aroumanian Society. He too is adamant that politics must be kept out at all costs. While they discussed Vlach issues together, Mr. Sterjou and Mr. Gatz often stumbled over the semantic obstacles of the current dispute between Greece and Macedonia: namely, about how to differentiate between the country and the capital if Mr. Gatz refers to both as Skopje; or referring to villages which have been claimed, conquered and renamed over the centuries. While both men invest some energy into such discussions, they dismiss it with a wave of the hand if asked if this presents an obstacle to unity. They both agree than an important force in the formation of an Aroumanian Society is the desire to find common ground as Aroumanians, and perhaps even to set an example.

Mr. Gatz: “We are about to go into the 21st Century; we are supposed to becoming more civilized. The friendship and cultural pride of all Vlachs from all over the Balkans — and the world — would make an excellent start.” To which Mr. Sterjou raises his glass: “Sānātati!”

PrevPreviousDid You Know… What Other People Have to Say about Us?
NextCommunity NewsNext