Welshman and Vlach? The Forgotten Story of Dafydd Ellis 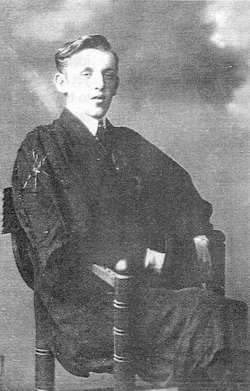 On the 15th of June 1918, a young Welsh soldier poet vanished from a British Forces camp a few miles north of Salonica. This was not the usual case of a soldier reported missing following a military encounter. On the contrary, he disappeared from the relatively tranquil surroundings of a field hospital far away from the battle lines. His subsequent fate has intrigued the Welsh literary world ever since; some people, including some close colleagues, believe that he joined a tribe of wandering Vlachs.

The soldier’s name was Dafydd Ellis, a 25-year-old graduate of the University of Wales, a teacher by profession and a promising young poet writing in the Welsh language. Ellis was a committed pacifist who, like many others in his position, volunteered to serve with the Royal Army Medical Corps to relieve the suffering of the wounded, after being assured by the Army that he would not be required to bear arms. Despite this assurance, early in 1918, he and some colleagues were ordered to serve in a combatant unit and he was only reprieved at the last moment following intervention of an influential friend.

This experience taught him that he could not rely on the Army’s promise and that he might soon be forced to choose between serving in a combatant unit or disobeying a military order (a serious charge which could bring him face-to-face with a firing squad). This left him distressed and depressed. To add to his anguish, his girlfriend at home in Wales ended their relationship to marry a civilian.

From their letters home we know that Dafydd Ellis and his Welsh colleagues frequently spent those spring evenings of 1918 roaming the mountains that encompassed their camp; the rocky outcrops and deep ravines reminded them of their homeland. They seem to have taken particular interest in the Vlachs (or “Romanians — gypsy type,” as they called them) who were passing the camp with great droves of sheep and ponies during the months of April and May, on their way north to their summer pastures. On one occasion they describe a visit to the semi-ruined village of Yaialajik (possibly Turkish for “summer pasture”) a few miles to the north, a village that was inhabited by these same people. His companion on one of those jaunts recalled Ellis saying how easy it would be for them to mingle with the natives in those mountains where the Army would not have the slightest hope of finding them.

Dafydd Ellis was certainly attracted to the Vlach Shepherd’s way of life, which probably reminded him of his own upbringing on a mountainous farm in Wales, and it may have prompted his decision to leave the teaching profession after the war to return to the family home. He had studied Classical Greek at university and was rapidly learning the Serb language from the patients at the field hospital and his naturally warm personality meant that he got on well with the native peoples.

On 14th June 1918 a colleague at the same camp wrote an urgent letter home saying that he had been ordered to join a combatant unit and asking his father to secure letters from the local priest and Justice of the Peace to support his appeal. We do not know whether or not Ellis himself was subject to the same order, but on the following day he disappeared from the camp, leaving behind his personal belongings, including the identity disk that a soldier had to wear at all times.

A close friend of Dafydd Ellis who also served in Macedonia, but not in the same camp, was the renowned Welsh poet Cynan, later to become the Archdruid of Wales. In 1946 Cynan published a “romance,” Y Ffarwel Weledig, a veiled attempt to outline Ellis’s subsequent life amongst the Vlachs as told to Cynan in a letter from a fictitious Welsh soldier serving in Macedonia during World War II. Wounded in 1941, this soldier claims to have been rescued and nursed by a band of Vlach shepherds led by their Welsh-speaking friend Dafidd, previously a medical orderly who deserted from the British Army in 1917 (sic) when ordered to a combatant unit. He joined a Vlach tribe led by their chief Georgios and married his daughter Rhoda, who died at the birth of their daughter Caritas.

Dafydd Ellis was above all else a poet, and if he did survive somewhere in Macedonia, I feel sure that he would have continued to write poetry, even in an adopted language.

Note from Professor Tom Winnifrith: Yiaylajik can be traced on the map supplied in the British General Staff account of the Salonica campaign. Confusingly, there are two villages with the same name, but the one west of the Vardar River is not mountainous enough to fit Ellis’s description of it. The British Staff map is full of Turkish and Slavonic names, reflecting no doubt the ethnological composition of the area in the First World War. After the war and the subsequent Greek defeat in Asia Minor there were massive population exchanges with both Bulgaria and Turkey, and northern Greece became much more racially homogeneous, although there are still small Vlach, Slav, and Turkish minorities. The Second World War and the civil war which followed it caused further turmoil in the area. Salonica has greatly expanded and its suburbs have now almost reached the valley which reminded Ellis of the Llanberis Pass in Snowdonia.

Neither Weigand nor Wace & Thompson mention Vlachs so close to Salonica. The nearest Vlachs they refer to are at Poroi and in the Meglen, and Vlachs can still be found there today in spite of massive movements of population. Many Meglen Vlachs moved to Yugoslavia or to Romania, where I have met there descendants. Last July I visited Salonica and caught with surprising ease a bus to the area where Ellis was last seen. The road climbed steeply through the suburbs of Salonica and crossed the ring road. There are houses outside this ring road and the open country looked a lot less real than it must have in 1918 when Ellis compared it to his native Wales. There are rocks and streams and hills and woods in both places, but heat and pollution have made the outskirts of Salonica much less attractive. I took some photographs of where I thought Yaiylajik would have been sited near the head of a stream and walked to Philiro, a new village inhabited by people from Asia Minor, who would not have heard of Ellis even if I had had the energy to ask them.

I am asking any readers of this Newsletter if they have any clues to this interesting tale. It seems unlikely that a Welsh Vlach would be easily forgotten, although I can see that he would have reasons for concealing his existence. We no longer of course feel any blame should be attached to him. Even if Ellis has vanished without a trace, there are points of interest in his story. His ability to learn languages is not surprising. Welsh is a minority language taught today in many schools, although some object to learning it instead of more usual languages like French, German, or Spanish. Advocates of Welsh point out that the acquisition of Welsh is a good preparation for foreign language learning, and Ellis would seem to provide evidence for their point. The same arguments could apply to the teaching of Vlach. The languages Ellis learned are again not surprising. Classical Greek would probably help him with modern Greek and, probably, to start with, he would converse with the Vlachs in Greek. It need not alarm us that he refers to them as Rumanians. Serbs would be present in Salonica in 1918, as the Serbian Army that had been evacuated through Albania and Corfu had joined the front by the final year of the war. There would also be people in the villages above Salonica who spoke a Slav dialect. The recent and controversial publication by Anastasia Karakasidou, Fields of Wheat, Hills of Blood, makes it clear that there was once a considerable Slav presence in Assiros to the north of Yaiylajik as well as some Vlachs, although the arrival of refugees from Asia Minor has meant that this area is now solidly Greek-speaking. Those who maintain that Greek Macedonians are and always have been of pure Greek stock should look at Ellis’s accounts; perhaps somewhere in the Balkan hills there is a Vlach or Greek speaker who has some Welsh blood.

Symbol of Vlach society in Freiburg