Putting the Record Straight: An Interview with Tom Winnifrith 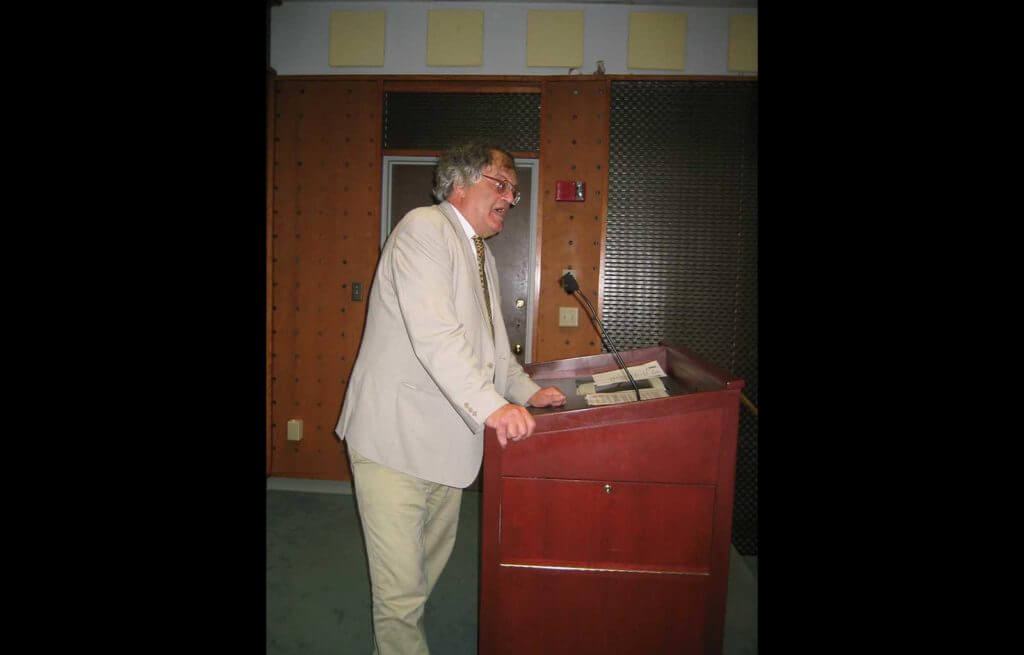 Following are excerpts from an interview conducted with Dr. Tom Winnifrith on April 15, 1990, during his tour to study Vlach communities in Australia and America. The interview was conducted by Nicholas Balamaci, with additional questions posed by Spiro Macris and George Moran.

N.Balamaci: Who are the Vlachs?

T.Winnifrith: The Vlachs are a Latin-speaking people in the Balkans. Their history has not been properly recorded. They are, as a people, not connected with their immediate neighbors –the Albanians, the Slavs, the Greeks. They are connected with the Romanians as fellow Latin speakers.

NB: Do you mean historically and linguistically connected?

TW: Linguistically. “Historically” is a very difficult question to answer.

NB: You said that the Vlachs are not connected with their neighbors. What did you mean by that?

TW: Their language is entirely different from Albanian, Greek, and Slavic. They have some words in common but to describe Vlach as a “dialect of Greek” — as some people do — is clearly wrong.

NB: How did you become interested in the Vlachs?

TW: I studied Latin and Greek at school and university; I’ve always been interested in minorities; and I am very fond of the Balkans. I think also I’m just an oddball, always supporting the underdog. One day at my university I picked up a book in French on the Vlachs and that really inspired me. I then discovered that all that I read about the Vlachs seemed wrong, and that inspired me to try to put the record straight.

NB: What makes the Vlachs an interesting study?

TW: It is a subject nobody else has really studied properly since Wace & Thompson in 1913. A lot has happened in the Balkans, and this is an opportunity to put the record straight in the face of a lot of chauvinist nationalist prejudice. Greek books on the Vlachs all take the line that the Vlachs are the descendants of Roman legionaries who married Greek wives and persuaded their wives to speak Latin. A lot of other nationalities in the Balkans tend to ignore the presence of the Vlachs. Romanian writers on the whole maintain that the Vlachs are Romanians — though they can’t explain why Romanians should leave the Danube Basin and settle on high mountains in the Pindus, many miles away from Romania.

NB: You gave a figure in your book of roughly 50,000 Vlachs remaining. Do you still stand by that number?

S.Macris: In your book, you mentioned some Vlachs who had converted to Islam and moved to Turkey. Could you speak to that?

TW: I have not been able to trace them; my guess is that they would have lost their Vlach identity. But then again, I met a young girl in the Meglen [Vlach district just north of Salonica] who had grown up in Tashkent, where she spoke Russian, Greek, and Vlach — so Vlach is there in Russia as well as in Melbourne, and for all I know, it’s probably in Turkey as well.

NB: Can I get your comments on the Nacu Zdru case?

TW: Yes, my comments are those of The GreekAmerican — I mean it did seem to me extraordinary that this kindly old man should have been expelled from Greece for doing nothing else except printing his opinions — even if some of those opinions were misplaced.

G.Moran: Vlach is an undeveloped dialect; isn’t it necessarily relegated to oblivion? Is there any hope for the future?

TW: I’ve been thinking about this quite a long time — I think there is hope if the Vlachs communicate with each other and with the outside world, saying what they want. And what I think they want is their history recorded correctly, and they want their language recorded, if not preserved, and they want their identity — as shown by culture, dances, wedding customs, and various other rituals — established. They do not want any political struggle. Now, in the case of the language, we do have an example in England of a language — Gaelic, in Scotland — doing rather better because schools are being encouraged by the government, and people, even non-Gaelic speakers, are prepared to let their children have a go in this language. It will be very difficult to set up schools in Greece and Yugoslavia, because the governments there are strongly nationalistic. But I think with the help of the European Community, it might be possible to establish voluntary schools in Vlach in those two countries. If a language dies, attempts to revive it are almost impossible. A lot of history is embedded in Vlach, and I would regret its passing.

SM: Given the developments in Eastern Europe and Russia, we seem to be going back in time to 1914 and the Great War, where these petty, small nationalistic groups vie with each other for territory and cultural supremacy. It seems to me this is a dangerous time for the Vlachs — I can see that if I were the President or Prime Minister of Greece, Bulgaria, or Yugoslavia I would not feel good about giving them complete freedom to express their culture and what-have-you. Must culture and language become associated with territory? Is a homeland essential to the preservation of a culture? It seems to me it would be disastrous for the Vlachs to want a homeland; we must speak of realistic goals — cultural, linguistic — that will not create fear in the Balkan governments today.

TW: I absolutely agree. There is no good to be achieved by trying for a new nation state. We should follow the example of the Scottish Gaels, who demand only their culture, schools and language, not an independent Scotland.

GM: How do you account for the language surviving in Metsovo, given all the pressures and active discouragement of its use?

NB: If I may interject — one theory I’ve heard is that Vlach was preserved better in the villages that had no Romanian movement because there was no reaction against them…

TW: Yes — I have written something on this. I actually conducted a survey of twelve Vlach villages, trying to work out why it survived in some and not in others. We did come to that same conclusion — that Vlach had survived best where Vlach had been encouraged least — because what a pro-Vlach movement led to was suppression and emigration. And that would explain Metsovo, where they threw out the Romanian school in 1913. Where you had Romanian schools, you had a dissatisfied minority, and that dissatisfied minority often emigrated.

NB: How do you see the European Community inter-vening? How realistic is it?

TW: There is a Bureau for Lesser-Used Languages of the E.C., and I’ve tried to get them interested in the Vlachs, but they said it depended very much on the cooperation of the individual states. The E.C. is interested in minority languages for various economic reasons — they are aware that there are thirty minority languages as well as the nine official ones — and they can bring pressure in certain instances. A T.V. producer is interested in making a documentary on European minorities, and I’m involved in the episode on the Vlachs. This producer is hoping for E.C. support because Europe is very rich and wants, as it encourages political uniformity, also to encourage cultural diversity. The first thing to do is really get the Vlachs on the map, and that we will try to do, and then once people know who the Vlachs are, then the E.C. may be able to do something about the situation.

NB: You’ve now been around the world and seen more Vlach communities than anyone else. What is the next step for us?

TW: The first thing to do is try and get Vlach communities to talk to each other so that everyone isn’t acting in isolation. The communities in America, Australia, Yugoslavia, and Greece should meet and try to hammer out a policy for where you hope to go, what your aims are — these being modest aims — and a method of keeping in touch with each other. This would attract Vlachs from all over the world, even those who aren’t really aware that they’re Vlachs. In Australia and America, there’s a particular problem because the Vlachs there tend to associate with Greeks and Yugoslavs, or even Romanians, and don’t establish their separate identity. So it is very difficult — and yet, unless you do something, the whole thing will end.

PrevPreviousBook Review: Brigands with A Cause: Brigandage and Irredentism in Modern Greece, 1821-1912 by John S. Koliopoulos
NextCommunity NewsNext